No Legislation Without Consultation 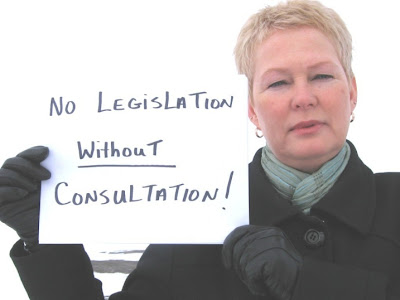 CUPE Saskatchewan has recently launched a new web-site entitled: dontgiveuphope.ca. The purpose of the site is to raise awareness about the lack of public consultation and the refusal of the Brad Wall government to engage citizens in a serious and respectful dialogue around Bills 5 and 6.

The Sask Party government is also refusing to make public the transcripts of "so-called feedback sessions" being held with individuals and groups around their two anti-democratic, flawed pieces of legislation. These bills amount to an assault on the Charter Rights of working women and men in the province of Saskatchewan.

Since Brad Wall's government is refusing to be transparent about these bills, and is refusing make submissions public - I guess someone else will have to do it. If you would like to read some of the briefs which have been submitted you can download them by following this link: http://www.dontgiveuphope.ca/reports_and_briefs
Posted by Larry Hubich at 09:12

Larry - I broke my leg right before the recent CUPE 1975 strike. I was unable to schedule followup appointments with the orthopedic doctor I was dealing with because his secretary was on strike. That should have never happened strike or no strike. Period. There were many more reports of patient care suffering as a result of the strike at University Hospital. I dont know that I agree with everything in these two bills (shortening the time period to complete a membership drives comes to mind as something I dont support) but my experience certainly showed me that "voluntary" agreements on essential workers dont work.

Do you think that a secretary in a Dr.'s office would be deemed by this government as an essential service?

For the record, CUPE 1975 provided emergency services where and when they were asked to by the employer. For instance, they had staff assigned to tend to the animals and livestock in the veterinary clinic and agriculture. Other CUPE members also worked during the strike to ensure public safety.

Are you aware that the U of S management was so unconcerned with providing for the administrative needs of the Doctors during the strike that they had their people dispensing "coffee" to the students at the unionized coffee shop instead of having them assigned to do some administrative work.

Where were their priorities if they deemed serving coffee to be more essential then ensuring Doctors could get some admin work done?

It is not appropriate for government to strip away the Charter Rights of workers to respond to the incompetence of management.

Everyday of the year patients are airlifted out of this province because of a serious shortage of trained health care workers. Somehow that isn't a priority which attracts media attention and public outcry. But have a worker go on strike for 15 minutes and you'd think everybody in the province was going to fall ill and die.

How about an honest debate and public discussion about these matters? Instead of the flagrant exaggerations from people like the President of the University of Saskatchewan? Supported and repeated by people like the Premier and his minions. What an embarassment and shameful behaviour that is.

I challenge the Part-time Minister of Labour, the Premier, or both, to a "Televised Public Debate" to discuss these matters and their two ill conceived, anti-democratic pieces of legislation.

Again, thank you for participating in this blog.

Who are you to challenge anyone to anything? Have you been elected to your office? Do you speak for all workers?

Once again, your arrogance and idiocy reign supreme.

Thank you for your questions. I will answer them in the order they were asked.

1. I have engaged in public debates with other individuals in the past - both from government and elsewhere. Such events are not unusual.

3. I speak on behalf of members of the 37 unions affiliated to the SFL (currently approx. 95,000). In addition, the SFL has long been recognized as the official voice of labour in Saskatchewan. Many workers who are not currently union members look to the SFL to speak and advocate on their behalf.

I won't even dignify your final comment with a response.

If in fact Saskatchewan does become a boom Province, that is not good for the Unions, as non union wages can rise with the boom, while many union contracts are multi year in nature. This has happened in other provinces where there has been a sudden upturn in the economy. OTOH when times get tough, unions will shine as they are sheilded by contract from any sudden serious downturn in the economy. So I do think that if the government has any inkling to weaken the position of the unions, now in boom time, would be the appropriate time.