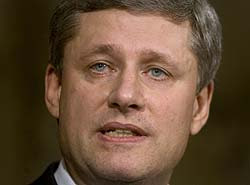 The article is reproduced below in it's entirety:

From Saturday's Globe and Mail

Prime Minister Stephen Harper called an election to secure a majority, and failed to get one.

This week, he created a completely unnecessary crisis that now threatens his government's very survival. And they call Mr. Harper a great strategist and superior tactician?

Thursday's economic statement was an economic lame duck and a political boner. It revealed, among other things, the kind of Conservative Party that all but its core supporters suspected would eventually be outed: a group of ideologues, led by a Prime Minister who discarded his campaign sweater to reveal an economist with a tin heart and a politician who looks everywhere for political advantage.

Instead of trying to grow Conservative support, he appealed only to his party's core. Instead of acting in a statesmanlike fashion at a time of crisis, he opted to play politics, proposing to cancel public subsidies for parties, a move that would disproportionately benefit his.

Instead of reaching out, as leader of a minority government and as president-elect Barack Obama is doing by talking to moderate Republicans, he smacked his opponents in the chops. Instead of heeding the advice of economists everywhere that the economy needs stimulus, he got his Minister of Finance to present a budget that offered cutbacks and tiny surpluses that absolutely no one believes will be realized.

There is a plausible case for caution, to wait a bit until economic issues clarify themselves and until the new American administration settles definitively on its approach. The government therefore, quite credibly, could have gone to Parliament, said it could not offer precise numbers because of unprecedented volatility, said there would be a deficit but a modest one limited in time, promised a budget in January, got a few infrastructure programs speeded up, and asked for suggestions. After all, this was a government that had admitted the economy would be in a "technical recession."

Instead, the government unsheathed its ideological swords, attacked political opponents, public-sector unions, disregarded overwhelming economic advice in the country (including from deficit hawks, premiers, and conservative-minded economists) and dared the opposition parties to turn the other cheek - a move, to the government's apparent surprise, the other parties were not prepared to do.

The economic statement was wrongly conceived on every front.

It misdiagnosed what the economy needs, and offered a completely bogus explanation.

Said the government: We have already injected $31-billion of stimulus in the economy through tax cuts since 2006. As if tax cuts in 2006 were designed for stimulus in 2009. No one believes that.

That would be like President George W. Bush saying his tax cuts of years ago were designed to help the current recession. Conservatives cut taxes mostly when the economy was robust (and therefore at the wrong time and in the wrong way, but that's another matter). The point now is that the stimulus hasn't been enough.

The government also gratuitously set off a political firestorm that will damage the Conservative Party.

Taxpayer subsidies for political parties exist everywhere around the world, even in the United States, where Mr. Obama refused them because he was raising so much private money. The subsidies exist, there as here, as a quid pro quo for eliminating corporate and union contributions. As such, they help parties finance themselves, do their work, and therefore contribute to democracy.

Finally, the government created a potential constitutional situation in which it could be defeated and replaced, quite properly under constitutional convention, by a Liberal-NDP coalition.

Late yesterday, Mr. Harper refused to modify his economic statement, put off confidence votes for a week to buy himself some time, and in effect dared the Governor-General, should it come to this, not to exercise her proper constitutional authority to ask another party to try to form a government without bringing on an election.

He argued that if his government were to be defeated, there would have to be an election, which is not consistent with constitutional convention. He was really threatening a possible constitutional crisis that, again, would be of his own making and that he would hope to turn to his partisan advantage.

The miscalculations have been stunning. Mr. Harper's strategy has accomplished already the near-impossible: to bring the Liberals and NDP together.

He had so many other, less partisan options at a time of economic crisis and grave national concern. That he acted in this fashion, at this time, was enormously revealing. And very sad."

Well he is a great self-centred strategist and super greedy tactician - a volatile combination. This one has been the most arrogant of prime ministers, a trait that seems to run rampant in his fellow party members - past and present.

As a voter I must take some comfort that others are not sitting back and doing nothing,this time.