When is the last time you got an 843% wage increase?

That's right folks.  You are reading it correctly.  An 843% wage increase.

That's exactly what the highest paid corporate executive in Saskatchewan gave himself over an 8 year span.  An examination of the Executive Compensation reports from the Potash Corporation of Saskatchewan show that President and Chief Executive Officer, William J. Doyle's compensation package is, in a word, astonishing.

That's the equivalent of an increase of more than 100% per year, each year, for 8 years. 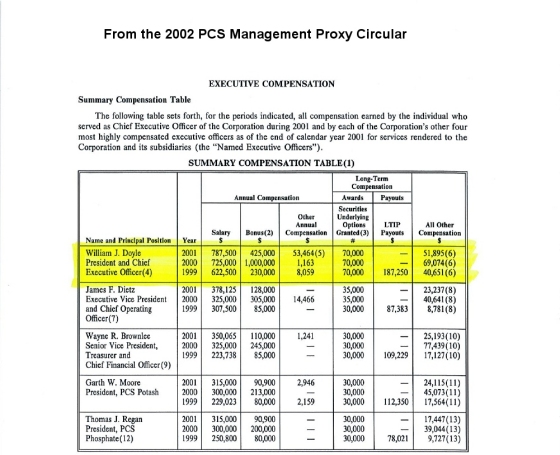 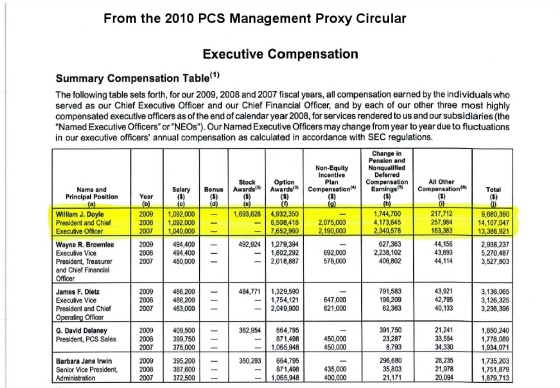 As President of the SFL, how much do YOU make?

Congrats to Mr. William J. Doyle on a job well done! Your hard work has paid off! I really do believ you are worth every penny!

Larry, If you want to make that much money get into that line of work. Shut up about what people make. You make more than me, does that mean you will give me your pay to make up the difference? I belong to a union so I pay your wage. I think you make too much mmoney. Time for YOU to take a pay cut!

b., Thank you for participating in this blog.

I don't begrudge anybody a decent living. I do however believe that the growing gap is a significant and serious problem, and I believe CEO salaries are excessive.

I hope your union is successful in achieving better wages and working conditions for you and the other members of your union.

When talking about a % raise a person gets, don't look at total compensation, look at base pay. Stocks and Options are based on Risk: (1) Risk in the market value of the security being traded as PCS; and (2)Risk in the decisions Mr. Doyle makes in the profitability of the company.

His job tenure is based on his decisions. I would say that although most people do not make this type of money - their job security is much higher. Much like the case that you were probably involved in saving the jobs of two grossly underachieving nurses putting a crying baby in a closet.

So before you go pointing fingers, maybe you should look in the mirror and truly ask yourself if you have a conscience and are working in the best interest of not only the Sask Federation of Labour but the people of Saskatchewan.

It is clear to see from your comments that you lack a firm grasp of the subject you are commenting on. i.e. Risk associated with Executive Compensation and stock options. Simply put, there is none.

As for your other comments, they are so incoherent and off-base that they don't even warrant a response.