Harper’s Hitlist: Power, Process and the Assault on Democracy - Dobbin

The following is reproduced from the Council of Canadians website: 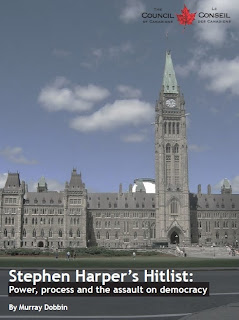 Author and Rabble.ca columnist Murray Dobbin details the harm Prime Minister Stephen Harper is doing to the political and social fabric of Canada in a new, hard-hitting essay commissioned by the Council of Canadians titled Harper’s Hitlist: Power, Process and the Assault on Democracy.

As Dobbin explains in the opening paragraphs of the essay, “This study is intended to examine the most serious violations of democracy committed by the prime minister and his government. Some are clearly more serious than others. But taken as a whole they add up to a dangerous undermining of our democratic traditions, institutions and precedents – and politics. These violations are not accidental, they are not incidental, and they are not oversights or simply the sign of an impatient government or ‘decisive’ leadership. They are a fundamental part of Harper’s iron-fisted determination to remake Canada, whether Canadians like it or not.”
Harper’s Hitlist: Power, Process and the Assault on Democracy
Download report here 1 MB or in sections below:
-   Part 1 - Stephen Harper’s Assault on Democracy
-   Part 2 - Two Prorogations in Less Than a Year
-   Part 3 - Thwarting Democracy
-   Part 4 - Controlling Critics
-   Part 5 - Manipulating and Muzzling the Media
-   Part 6 - A Personal Agenda
-   Part 7 - Failing to Protect Canadian Citizens
-   Part 8 - Harper Attacks Rights
-   Part 9 - Political Advocacy Under Fire
-   Part 10 - Conclusion
POLL: Environics, on behalf of the Council of Canadians, polled people about their feelings about proportional representation in February. Here are the results:

(These results represent the findings of a telephone survey conducted among a national random sample of 1,001 adults comprising 501 males and 500 females 18 years of age and older, living in Canada. The margin of error for a sample of this size is +/- 3.10%, 19 times out of 20.)