Raising the bar for Solidarity 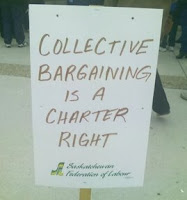 Linked in the next paragraph is an article by University of Manitoba Assistant Professor, David Camfield which was published in the Autumn 2007 issue of Just Labour: A Canadian Journal of Work and Society.

The article is entitled: CUPE's sympathy strikes in British Columbia, October 2005: Raising the bar for Solidarity.

The abstract is reproduced below:

From October 7-23, 2005, the strike by the 38,000-strong British Columbia Teachers' Federation (BCTF) was the "main event" in BC labour relations. Teachers demonstrated enormous solidarity and determination to achieve a fair negotiated settlement that they could put to a vote. The focus of this paper is not the BCTF strike itself but the remarkable sympathy strike action organized in support of BCTF, primarily by the BC division of CUPE. Such worker action is highly unusual. Since the 1940s sympathy strike action has been illegal and extremely rare. This paper sets CUPE-BC's strikes in support of BCTF in the context of the legal framework established over half a century ago and the decline of sympathy strikes that followed. It then summarizes the events of October 2005 and examines the effects and significance of the strikes and what made them possible. It concludes with a reflection on the implications of these events for the labour movement. The analysis here is shaped by the perspective that public sector unions are best able to resist hostile governments when they adopt a militant and highly democratic approach that aims to build a broad social movement, sometimes referred to as social movement unionism. Full Article (PDF)