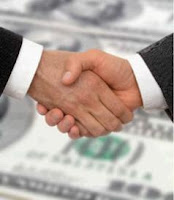 I recently read a couple of articles which, taken together, illustrate how corporations are making out like bandits while working-class taxpayers and other regular ordinary citizens are paying the freight.

"Most corporations, including the vast majority of foreign companies doing business in the United States, pay no income taxes, according to a Government Accountability Office report released Tuesday."

Meanwhile an article posted on the nupge.ca website: Canadian business taxes are among the lowest in world is based on a new report from KPMG which ranks countries in its annual report entitled Competitive Alternatives 2008 Special Report: Focus on Tax, the analysis looks at taxes paid by businesses in Australia, Canada, France, Germany, Italy, Japan, Mexico, the Netherlands, the U.K. and U.S.
From the nupge.ca article:

Ottawa (1 Aug. 2008) - Canadian business taxes are among the lowest in the world, contrary to the stream of misleading reports pumped out by corporate-funded outfits like the Fraser Institute.

KPMG.ca, the Canadian arm of one of the largest professional services corporations in the world, has issued a report finding that business taxes in Canada are markedly lower than those paid by American companies."

Most U.S. companies pay zero Income Tax in the states, and Canada's tax regime is even more favourable to corporations than that of the U.S. Nice scam!
Posted by Larry Hubich at 16:01

Yeah for Canada! Isn't this good I mean we are beating the Americans in some way right? But don't tell them we are!