Labour seeks its piece of the potash boom 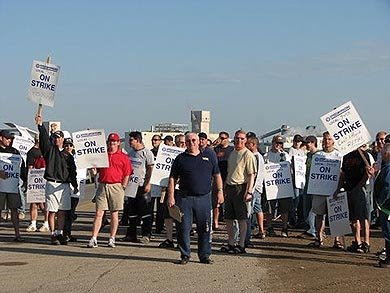 There's a very good article in the August 15, 2008 issue of Globe and Mail - Report on Business by David Ebner entitled: Labour seeks its piece of the potash boom.

The article sets out the glaring double standard being played out at three Saskatchewan potash mines where members of the United Steelworkers are looking to get a fair share of the unprecedented prosperity being enjoyed by the Potash Corporation of Saskatchewan (PCS).
As an example, PCS CEO, William J. Doyle saw his paycheque nearly double in the past year when his total compensation went from a meager $8,943,757 in 2006 to a stunning $17,188,621 in 2007.
The value of stock options for the top three executives at PCS including Doyle is nearing the almost unbelievable $1 billion mark.
From the article:

"....The soaring price of potash has made the top three executives who run Potash Corp. of Saskatchewan Inc. fantastically wealthy, with stock options worth a total of $846-million...."

"....But given that Mr. Doyle's stock options alone were worth $553-million at yesterday's close, and company profit in the first half of this year tripled to $1.5-billion (U.S.), the union has almost unanimous support among the 500 workers on the line at three mines in Saskatchewan...."

For more detail on the bargaining dispute please see the USW web-site at: http://www.usw.ca/program/content/5224.php