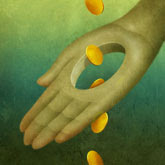 There's an article which appears recently on truthout.org that comes from The Washington Independent entitled: The Golden Parachute Survives. The upshot of the article: The $700 billion Wall Street bail-out isn't all that it's cracked up to be.

The article starts out:

"The creators of the financial mess may go unpunished.

For supporters of the Bush administration's $700-billion Wall Street bailout, it stands as a key selling point: a provision that limits pay packages for the heads of companies helped by the taxpayer-funded rescue program.

There's just one problem: It would do little to cap executive pay or rein in the enormous retirement packages - the golden parachutes - that have come to symbolize corporate excess." read more....