Sask. Chamber of Commerce behind government assault on workers 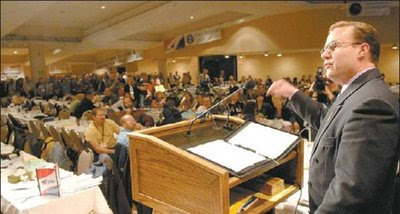 Not evident in the title are the additional tidbits the blog posting uncovers. It reveals clear evidence that the Saskatchewan Chamber of Commerce is a major force behind recent and ongoing assaults by the Sask. Party government against workers.
Kuchta has uncovered a couple of documents from the Chamber's web-site that illustrate this fact in spades.
The first document is a motion passed by the Chamber of Commerce at it's annual meeting held in Humboldt, May 8 - 9, 2008 which applauds the government for introducing Bills 5 & 6 and calls for comprehensive reviews of other labour legislation.
The second document is a 4-page letter of response from Minister Rob Norris to Chamber President Dale Lemke accepting the congratulations and promising to consult with the Chamber in more detail regarding the matters raised in letters from Lemke, including labour legislation.
In the meantime, Rob Norris has avoided, evaded, eluded and refused to meet with workers and their organizations regarding these matters. He continues to refuse to answer questions raised in forums sponsored by the labour movement, including at the SFL Convention.
Yet his door is wide open to his business buddies from the Chamber and other business lobby groups.
Posted by Larry Hubich at 09:22

Your organization should respect a minister of our province, but you only respect people which hold your radical views and ideals

My wife is in a union and can't stand your organization.

Keep shitting in your own nest Larry. !!

Maybe your wife should go work in a non-unionized workplace then, or better yet in a work environment that might have existed before any labour standard existed. THOSE SAME LABOUR STANDARDS THAT LABOUR ACTIVISTS WORKED LONG AND HARD FOR!! Some even lost their lives doing it. You know who's classless? Someone who is so uneducated that you could post a comment without any awareness. I am proud to be a union member, if your wife isn't, then tell her to get the hell out of Dodge.