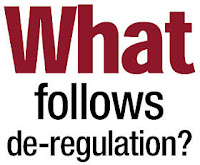 The reason the world is teetering on economic collapse is because of decades of right-wing policies that opened the door to the most rampant display of corporate greed in recent history. One of the biggest culprits of these policies is the wholesale deregulation of many sectors (including the financial sector) and putting the foxes in charge of the hen house.

Almost everybody on the planet acknowledges this fact - well except the corporate puppets sitting on the government benches in Ottawa.

OTTAWA, February 26, 2009, PublicValues.ca: It has become clear since the federal budget was introduced that the Conservatives are using it to sneak ideologically-driven measures through Parliament. Opposition MPs have condemned many elements of the omnibus budget bill known as C-10, but the Liberals appear unwilling to press for amendments.

Among the most contentious "hidden horrors" of the budget are the elimination of the right to make human rights complaints in pay equity cases; punitive treatment of public servants, unions and students; and opening Canada's waterways to industrial exploitation without environment assessment." Read more here....