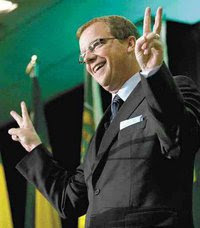 Regina – Saskatchewan Premier Brad Wall has broken his promise to not sign TILMA, today putting his signature on the New West Partnership trade agreement that is almost identical in every respect to the agreement rejected by the people of Saskatchewan in 2007.

“For Premier Wall to claim that he has not signed TILMA is simply not true,” said Larry Hubich, the President of the Saskatchewan Federation of Labour. “The New West Partnership is lifted almost word for word from TILMA and offers no meaningful protections for municipalities or Crown Corporations, the two issues Wall said just this week were the reason he would not sign TILMA. This agreement isn’t TILMA-like, it is TILMA.”

Like TILMA, the New West Partnership has a “no obstacles” clause (Article 3) which commits Saskatchewan to ensure that its measures do not operate to “restrict or impair trade,” a mutual recognition clause (Article 5) which will harmonize provincial standards and regulations to the lowest common denominator, and an investor-state dispute resolution process (Part IV), which gives trade panels the power to force governments to pay up to $5 million for any measure that violates the agreement. Procurement for all provincial government entities, Crown Corporations, municipal governments, school boards, and publicly-funded academic, health and social services are included in the agreement, with identical thresholds as those found in TILMA.

“Practically the only difference between the two trade agreements is the cover,” added Scott Harris, Prairie Regional Organizer with the Council of Canadians. “Besides adding the word “Saskatchewan” and changing “party” to “parties”, there isn’t a different word between the two until page 7 and only a handful of paragraphs that are different through the whole agreement. I don’t know how Brad Wall can keep a straight face when he says he hasn’t signed TILMA.”

The New West Partnership’s schedules 2, 3, and 4, which cover International Cooperation, Innovation and Procurement, respectively, expressly state that they are not legally binding on any of the three provinces and create no financial obligations.

“It’s clear that the only reason the other three agreements were stapled to the back of TILMA was so that Brad Wall could claim he was signing a new agreement,” said Hubich. “But I don’t think the people of Saskatchewan are going to be fooled by this smokescreen. The only part of the New West Partnership that means anything is the trade agreement, and it’s TILMA.”