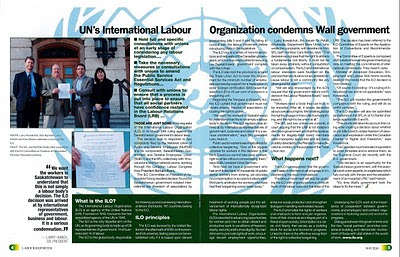 The May 2010 issue of the SFL Labour Reporter has a comprehensive article on the recent decision (which is a global rejection of the Wall government's labour legislation) by the United Nations agency International Labour Organization.

We want the workers in Saskatchewan to understand that this is not simply a labour body’s decision. The ILO decision was arrived at by international representatives of government, business and labour. It is a serious condemnation.

The opening paragraphs of the article are reproduced below:

- Hold full and specific consultations with unions at an early stage of considering any labour legislation....

THOSE are just some of the requests of the International Labour Organization (ILO), in its March 24th ruling against the Saskatchewan government’s labour laws.

The decision was in response to two complaints filed by the National Union of Public and General Employees (NUPGE) and its component, Saskatchewan Government and General Employees’ Union (SGEU); and the SFL collectively with 16 local unions and five national unions, working through the Canadian Labour Congress Vice-President Barbara Byers.

The ILO Committee on Freedom of Association’s long-awaited decision found the Saskatchewan government violated international law (freedom of association) by proclaiming bills 5 and 6 and by failing to consult with the labour movement before introducing them in the legislature.

The ILO made a series of recommendations and requests of the Canadian government, which is then responsible for ensuring the Saskatchewan government complies with the rulings. (see full article here...)