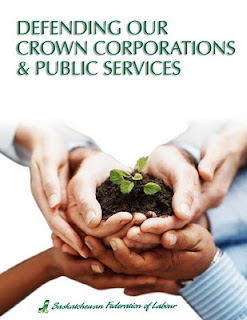 "For more than a century the Saskatchewan way of life has embraced public services and Crown Corporations. This includes parks, power, highways, and so much more.


Similar to the qualities of an oak tree, known for strength and versatility, Saskatchewan history is rooted in our Crowns and public services, which are owned and operated by the people."

Saskatchewan citizens need to know the facts about the government's intentions and actions to destroy these publicly owned institutions. Our Crowns and public services make our province the best place in Canada to live, work and raise a family.

Mostly agree. I think phone and insurance should be reviewed, though. Sasktel just has bad service and really stupid "policies" and SGI premiums are double what other companies charge....when you have a choice, that is. So, yes, I definitely support the crowns but not to the point where we get inferior service or get gouged, just because they have a monopoly.

It is the crowns, though, that provide Saskatchewan with a different kind of life than you find anywhere else in Canada. Some improvements would be good, not losing them altogether to "open for business". That would be a bit like throwing out the baby with the bathwater.

We need an actual discussion/debate and a complete review of all the crowns. There are currently too many crown corporations and still too much government involvement. We are in a changing Saskatchewan which means the provincial government regardless of political stripe needs to address those changes. I believe it's necessary for some crowns to still exist such as STC since Greyhound only covers certain areas of Saskatchewan. Sasktel however should be a private company. MTS (Manitoba Telephone Service) was privatized in 1996 and continues to exist today serving it's Manitoba customers. Governments can have shares in a private company. This whole idea of needing crown corporations is now an outdated concept.

My husband has worked for one of our crown corporations for 18 years now. In recent years it seems the current government is determined to treat crown corporation employees so badly that they have no choice but to leave. It's most recent move is to designate them all as "Field Staff" which means they can require them to work up to 11 hours a day 6 days a week with no overtime pay and then only give them 1 day off! Meanwhile these government bureaucrats sit in their posh offices and work their Monday to Friday jobs and I highly doubt that they put in a 40 hour week! I am ashamed to say that I helped to vote them into power. I can tell you that they won't have my vote the next time around.