No Transparency = No Accountability = No Democracy 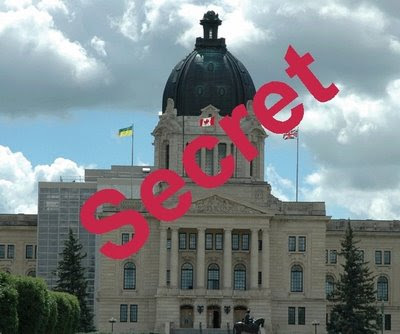 I've been following citizen blogger Joe Kuchta over on the Owls and Roosters Blog, and it's starting to become alarming that the Brad Wall Sask. Party government continues to reject legitimate requests by Mr. Kuchta under the The Freedom of Information and Protection of Privacy Act (FOIP).
It appears that anything Mr. Kuchta requests which has anything to do with labour laws, gets the same response. Rejection.
.
His most recent posting in this regard brings the total rejections he has received for information requested in the past year from the Ministry of Advanced Education Employment and Labour (previously the Department of Labour) to nine (9).
.
The posting is entitled: AEEL refusing to release Construction Industry Labour Relations Act records; secrecy rampant as freedom of information denials continue
What is so sensitive and secret that the government finds it necessary to hide what it is doing, under the direction of Minister Rob Norris, on the labour file? Does anybody in the mainstream media care about this?
The continued refusal by the government to provide access to information in the area of labour legislation, as requested by Mr. Kuchta, stinks to high heaven.
Posted by Larry Hubich at 19:45