"GM bankruptcy restructuring puts risk on to workers; no vision for a green transportation system

Frank Hammer is a retired General Motors employee and former President and Chairman of Local 909 in Warren, MIchigan. He now organizes with the Auto Worker Caravan, an association of active and retired auto workers who advocate for workers demands in Washington." - The REAL News

Posted by Larry Hubich at 10:24 No comments: 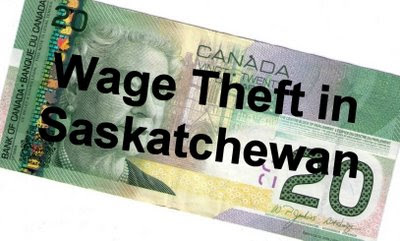 .
Coming up to 2 years ago, I posted a blog article entitled: Regina Restaurant Rips Off Workers.

It's a sorry tale of about how the owners of a restaurant called Poverino's Pasta Grill in Regina, Saskatchewan closed up their doors unannounced and left approximately 135 (most young and student) workers holding the bag and cheated out of over $62,000.00 in unpaid wages.
In other words, the owners of Poverino's Pasta Grill stole over $62,000 from a bunch of unsuspecting, trusting, and obviously vulnerable young workers.
So, in the 2 years since Poverino's closed the doors, and the nearly 2 years since they were found by the Department/Ministry of Labour to be guilty of violating the Saskatchewan Labour Standards Act and cheating the workers out of their wages. And since Poverino's has been ordered to pay the 62 grand to the workers, how much money do you think those 135 have received?
Well, according to my information, NOT A SINGLE NICKEL.
At a recent meeting with officials of the Ministry of Labour, I raised this matter again. I was attending a consultation meeting regarding the governments plans to reduce the minimum age of work to 15, in sectors including the notoriously bad "restaurant industry". I said I was skeptical and concerned that young workers would be protected because they aren't being adequately protected now. I questioned why individual workers should have the responsibility for enforcing the governments laws. Why is it necessary for a student to take an employer to court, in order for the employer to comply with the laws of the land? That's the government's job.
This past week, I received the response linked here. It confirms that employers can get away with theft by "positioning themselves in a 'judgment proof' environment".
What do you think would happen if one of those workers took $62,000 out of the cash register and high-tailed it out of town? Do think the cops would be on the look-out? Do you think if they found the crook, that they'd arrest him and toss him in the slammer? You bet!
What we are witnessing in Saskatchewan is government sanctioned corporate theft. When is somebody in the government going to do something about it?
Posted by Larry Hubich at 22:36 5 comments:

Canadians talk to Americans about health care - The Real News

People from Toronto respond to a US advertising campaign about the Canadian health-care system.

While the debate over changes to the US health-care system continues, lobby groups are investing advertising dollars to get their point across. One such group, Conservatives for Patient's Rights has released an advertisement outlining Canadian dissatisfaction with government run health care. The Real News Network invited Torontonians to respond.

Posted by Larry Hubich at 12:33 No comments:

Posted by Larry Hubich at 06:07 No comments:

You can thank the labour legislative policies of the Brad Wall Sask Party government for creating a climate where workers and their rights are treated with contempt.

More and more employers are flexing their new found muscles, and acting like thugs and bullies, since Wall and his 'business at any cost' team tilted the power balance even further against workers and in favour of the bosses.

In the meantime, the part-time minister in charge of the labour portfolio, Rob Norris, is luke warm when asked whether he would intervene to assist workers. This particular minister never seems to have any problem making excuses for the boss, or going to bat for corporations.

Maybe he can convince his boss to change the name of his portfolio to "The Ministry of Management".

.....The cab drivers allege one of the company's managers has verbally abused many of the Pakistani and other South Asian employees with racial slurs.

The company said the comments resulted from a misunderstanding from one manager.

"I made sure officials will be on hand," he said.

The investigation will include input from United Cabs.

Check out the coverage in the Saskatoon StarPhoenix and Regina Leader-Post:

Cab drivers suspended following protest - StarPhoenix
Gov't investigating taxi driver suspensions - Leader-Post
.
While you're at it check out this posting over on libcom.org: Cab drivers wildcat against management racism
Posted by Larry Hubich at 10:59 No comments:

These artists all oppose Brad Wall's vision of what Labour Laws should be:

"Richard Wolff: Unions should convert their position as owners into active participation in making decisions."

Posted by Larry Hubich at 10:58 No comments: 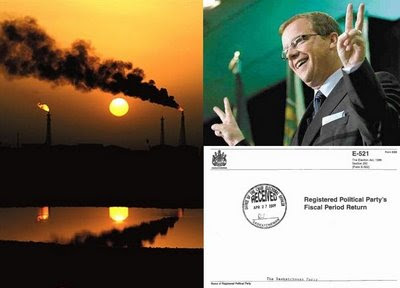 Posted by Larry Hubich at 08:36 No comments:

Olbermann: Is Colbert laughing with you or at you?

Posted by Larry Hubich at 09:08 No comments:

Agri-biz at root of swine flu? - The Real News

While you're at it, check out this article on Wired Science: Swine Flu Ancestor Born on U.S. Factory Farms

Posted by Larry Hubich at 15:20 No comments: