Posted by Larry Hubich at 06:13 No comments:

Posted by Larry Hubich at 06:02 No comments: 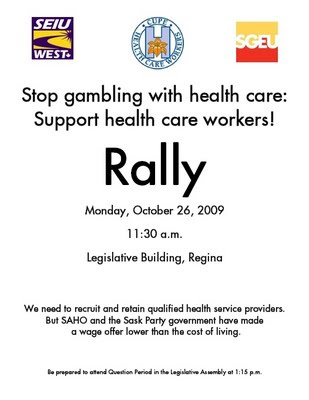 Hard working women and men who work in the health care sector in various Saskatchewan communities are saying that the Wall government wage and settlement offer after 17 months without an agreement is an insult.

Posted by Larry Hubich at 19:10 No comments:

Posted by Larry Hubich at 23:47 No comments:

The Saskatchewan Federation of Labour will be holding it's 54th Annual Convention from October 21 - 23, 2009 in Saskatoon, Saskatchewan.

New Book: Selling Out - Academic Freedom and the Corporate Market

There's been a new book released entitled: Selling Out - Academic Freedom and the Corporate Market. It is written by University of Saskatchewan Professor Howard Woodhouse.

The promotional excerpt found on McGill-Queen's University Press web-site is reproduced below:

Academic Freedom and the Corporate Market

How Canadian universities are abandoning their intellectual independence by capitulating to the interests of big business.

In a powerful defence of the values that define education, Howard Woodhouse uses concrete and vivid examples to show how universities in Canada have been engulfed by the market model of education and how administrators have done little to resist this trend.

Selling Out demonstrates that the logics of value of the market and of universities are not only different but opposed to one another. By introducing the reader to a variety of cases, some well known and others not, Woodhouse explains how academic freedom and university autonomy are being subordinated to corporate demands and how faculty have attempted to resist this subjugation. He argues that the mechanistic discourse of corporate culture has replaced the language of education - subject-based disciplines and the professors who teach them have become "resource units," students have become "educational consumers," and curricula have become "program packages." Graduates are now "products" and "competing in the global economy" has replaced the search for truth.

Challenging the current orthodoxy that the market model is the only way forward, Woodhouse argues that governments have a responsibility to fund universities, recognizing that they are the only places in society where the critical search for knowledge takes precedence.

"Woodhouse argues his case well, providing evidence from several universities and a relevant literature, and showing that the problem he addresses has manifestations throughout the university system in Canada." Patricia Marchak, University of British Columbia

"There can be very few researchers in Canada who know the literature as well as Woodhouse and he draws on it very effectively to support his argument. Selling Out is a powerful defense of the values intrinsically related to universities, and an exceptionally well documented account of the threat to those same values." William Hare, Mount Saint Vincent University

Howard Woodhouse is professor of educational foundations and co-director of the University of Saskatchewan Process Philosophy Research Unit."

Posted by Larry Hubich at 21:39 No comments: 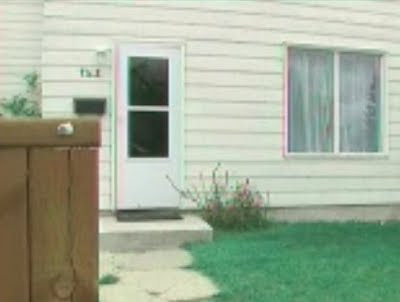 According to the CBC story, the 4 workers were brought to Canada from the Philippines with promises of employment in Regina, and with promises of expense re-imbursement for airfare and health-care costs.
Shortly after starting their jobs they routinely faced threats and abusive treatment by the employer. In addition they were relocated to the company's Brandon franchise. According to the article the workers were living in a house owned by their employer and were being gouged for rent, paying up to twice as much as what the same home rents for today.
The company in question owns 3 Wendy's Restaurants, and is a member of the Regina & District Chamber of Commerce.
This type of situation is an embarassment to every citizen in this province, and country.
Click to View CBC report in Quicktime here.
Posted by Larry Hubich at 19:17 No comments: 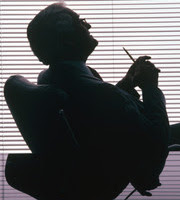 Posted by Larry Hubich at 10:42 No comments:

Hellmann’s - It’s Time for Real from CRUSH on Vimeo.

The Truth about the Lies about Acorn - Rachel Maddow

Posted by Larry Hubich at 23:24 No comments: 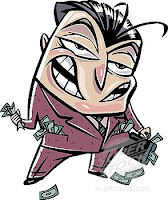 The most recent development in the Poverino's case is a letter which was sent out to the young workers on July 16th, 2009 telling them that the Ministry of Labour has reached the limit of their ability to assist the young workers to collect the money they are owed. You can read that letter here.
I have a question - How aggressively do you think the government of Saskatchewan would be pursuing this (through the Ministry of Labour and/or Ministry of Justice) if one of these 135 young workers was the son or daughter of the Premier? Or the Minister of Labour?
Posted by Larry Hubich at 07:32 No comments: