I'm going to be taking a bit of a blogging break while I enjoy some of the summer sun. I have turned on the "comments moderation option" because my availability to monitor the blog over the next period of time will be limited.

I may post the odd article over the next while, but for the most part, I'm on vacation for the next 2 - 3 weeks.

Larry
Posted by Larry Hubich at 07:35 No comments:

Iraq story buried by US networks - The Real News

Read transcript here....
Posted by Larry Hubich at 22:11 No comments:

An article by Regina Leader-Post senior political reporter, Murray Mandryk, in the Thursday, June 26, 2008 issue of the paper reveals that the Sask. Party government engaged in what can only be described as a witch hunt when they terminated long-time civil servants as part of their so-called "transition" to power.

The article further reveals that the person who (it appears) was actually calling the shots is an unelected individual from the "transition team" - presumably appointed by the Premier.

You can read the complete article by clicking here. It's a stark illustration of how ideological, vindictive and just plain mean-spirited the new government is. And that a small, tight group of unelected, unaccountable, conservative party loyalists are the ones who are actually running the show.

There is a follow-up article by Mandryk in the June 27 paper entitled: Krawetz testifies, hearing concludes. Excerpt:

"Deputy Premier Ken Krawetz said he had neither personal reasons nor any information to suggest that former civil servant Allan Walker could not have performed his job for a Saskatchewan Party government.

Such personnel assessments were "largely made by Doug Emsley" -- a long-time party supporter and private businessman briefly contracted to work for Premier Brad Wall's office during the transition phase, Krawetz testified at a Public Service Commission hearing Thursday. It was Emsley that had a "discussion" with Advanced Education, Employment and Labour Deputy Minister Wynne Young on who had "lost the confidence of the government."

Early on in the mandate following the election of the new Brad Wall team, the Sask. Party government announced that they would be eliminating the "stylized wheat sheaf" as a symbol of Saskatchewan. This announcement resulted in much public outcry from the citizens of the province who, over the years, have grown quite fond of the symbol.

As a result, the Sask. Party government backed away from their stated intention and announced that they had a change of heart and accordingly would not be abandoning the much loved symbol.
Now in my job, I get a lot of correspondence from government officials, agencies, ministries and departments - low and behold, the letterheads are changing and by stealth the much admired "wheat sheaf" is being systematically dropped. In fact, go to the Provincial Government website at: http://www.gov.sk.ca/ and see if you can find it. Play along for fun and prizes!
Is that how the Sask Party runs the province? Say one thing - do the opposite.
Posted by Larry Hubich at 10:58 8 comments:

The Saskatchewan Federation of Labour (SFL) condemned Viterra today for its ongoing attack on members of the Grain Services Union (GSU) who work for Viterra across the Prairies.

A collective bargaining dispute is underway with two bargaining units of the GSU, who are in a legal strike position as of 12:01 AM on July 2, 2008. Presently Viterra is refusing to resume negotiations and has essentially given the union a final offer. Both affected bargaining units recently voted to reject the offer.

“We have been watching carefully Viterra’s attempts to break the union following the buyout of the competition by predecessor Saskatchewan Wheat Pool. Viterra is not respecting the collective bargaining relationship with their workers, one that has been in place for seventy years. We condemn any employer who does not recognize this important relationship and does not bargain in good faith,” said Larry Hubich, President of the SFL.

“It was through the sacrifice of hundreds of workers that Saskatchewan Wheat Pool was able to survive and ultimately become Viterra. The aggressive anti-worker, anti-union posture of Viterra management betrays the sacrifices made by those workers. At a time of unprecedented growth and optimism on the Prairies, and at a time of significant challenges related to retention and recruitment, the approach of Viterra management towards their workers defies logic,” added Hubich.

The SFL calls on all workers and citizens to support GSU members in their efforts to get a fair collective agreement, and in their struggle to have their constitutional right to freedom of association respected by their employer.

“Personally as a Viterra shareholder, I am embarrassed that this corporation would resort to such draconian tactics in its dealings with its dedicated and skilled workforce. The actions of the Harper government, who is trampling on democracy in his approach to the Canadian Wheat Board, are obviously emboldening this employer. Brad Wall’s government, who is rolling back legislation that protects workers’ rights, is further creating an environment that supports union-busting and prolonged labour disputes,” added Hubich.

On The Map with Avi Lewis: Alberta Oil Sands

This is 1 year old, but very relevant to current developments.

Huffington breaks down the media - The Real News

Arianna Huffington on her book Right is Wrong - Read transcript here....
Posted by Larry Hubich at 21:12 No comments:

Temporary Foreign Workers getting ripped off in Alberta big time!

The Alberta Federation of Labour has issued a scathing news release chastising unscrupulous employers, a lax union and the Alberta government for creating the environment to allow Temporary Foreign Workers to be systematically ripped off, exploited, and effectively robbed.

Responding to an article that appeared in the June 18 issue of the Edmonton Journal - "Chinese workers ripped off, gov't admits" - Alberta Federation of Labour President, Gil McGowan said,

What a huge embarassment this kind of treatment of workers is for all of Canada.
Posted by Larry Hubich at 19:29 No comments:

The Rich Just Keep Getting Richer

A tip of the hat to Ian Chadwick over on "The Mumpsimus Blog" for a revealing posting entitled: The Politics of Greed.

Chadwick does a good job of linking to various sources and reports which reveal the seamingly never ending explosion in the area of executive compensation. His entry graphically illustrates the obscene levels of pay and perks being enjoyed by the world's wealthiest.

The sources Chadwick links to include:

The Most Destructive Project on Earth: The Canadian Tar Sands 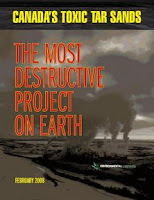 "Because of their sheer scale, all Canadians are affected by the Tar Sands, no matter where they live.
.
If you live downstream, your water is being polluted and your fish and wildlife may be dangerous to eat. If you live in Saskatchewan you are a victim of acid rain. If you live in BC, "supertankers" may soon be plying your shoreline carrying Tar Sands oil to Asia. If you live in Ontario, you are exposed to harmful emissions from the refining of Tar Sands Oil. And the impacts do not stop at Canada's border – US refineries are re-tooling to handle the dirty oil from Alberta.
.
With the Tar Sands, Canada has become the world's dirty energy superpower. Environmental Defence's report highlights the environmental and human health effects of the Tar Sands. And, outlines what the federal government should do to clean it up." -Environmental Defense

.
H/T & thanks to Don Kossick at makingthelinksradio.ca for this reference. Making The Links will be running a series of programs entitled "Radio Free Saskatchewan" - the following will become one of the programs in the series.
.

"In this program Making the Links Radio's Don Kossick discusses the environmental impact of the tar sands with Matt Price and Peter Dillon. Peter Dillon is a scientist looking at the impact of the acid rain from the tar sands. Matt Price works with Environmental Defence and was co-author of the report Canada's Toxic Tar Sands: The Most Destructive Project on Earth.
.
Listen Now!
.
More information can be found at: http://www.environmentaldefence.ca/reports/tarsands.htm"

Posted by Larry Hubich at 09:22 No comments:

SGEU and NUPGE announced today they filed a complaint, charging that the government of Saskatchewan violated Conventions of the ILO when they passed Bills 5 and 6.

The two anti-union pieces of legislation make it much more difficult for workers’ to exercise their rights to strike, to collectively bargain, and to form unions.

“The SFL fully endorses the case made to the ILO and we look forward to submitting a supporting complaint in short order, with additional evidence and argument,“ said Larry Hubich, SFL President.

The complaint argues that Bills 5 and 6 violate key ILO Conventions that uphold workers’ freedom of association. The lack of meaningful consultation prior to the introduction of these bills is another key aspect of the complaint.

“The SFL will argue that bills 5 and 6 reverse the international, historical trend of granting and expanding workers’ rights. When the government passed Bills 5 and 6, they did it for ideological reasons that do not stand up under international law. The Supreme Court of Canada has confirmed that workers’ rights are Charter rights. The actions of the Wall government are inconsistent with these nationally and internationally recognized principles,” added Hubich.

Posted by Larry Hubich at 22:55 No comments:

Below is linked a 60 slide, powerpoint presentation on NAFTA by Janet M Eaton, PhD - click the image to view.
. 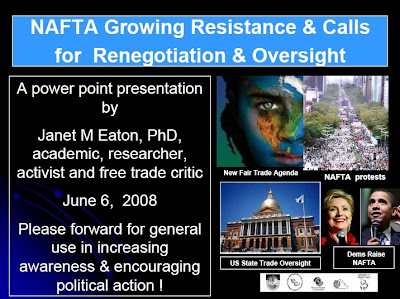 Posted by Larry Hubich at 19:58 No comments:

Posted by Larry Hubich at 18:29 No comments:

Money for murder 'cooperation fund' included in the proposed agreement

Ottawa (10 June 2008) - Despite a growing number of organizations and individuals raising concerns about negotiating a free trade agreement with Colombia, the Harper government has gone ahead and tentatively signed a deal with the country's murderous regime.

Foreign Affairs Minister David Emerson says in a statement on his department's website that the "agreement will expand Canada-Colombia trade and investment and will help solidify ongoing efforts by the government of Colombia to create a more prosperous, equitable and secure democracy."

The signing took place despite condemnation by many prominent Canadians and organizations of the continued killing of activists in Colombia, and repeated appeals to the prime minister to halt free trade negotiations with the brutal government that runs the South American country.

One of the most controversial aspects of the negotiations is a provision that would allow the Colombian government to pay a token monetary amount into a cooperation fund when a Colombian trade unionist is murdered." (read more....)

Posted by Larry Hubich at 20:12 No comments:

Democracy and government under siege from Corporate influence peddlers

Joe Kuchta over at the "Owls and Roosters" blog has just posted another comprehensive piece which clearly illustrates how our governments are coming under the increasing control and influence of companies and the 'non-elected' corporate elite who occupy the boardroom suites.

Democracy is being destroyed by corporate payoffs, influence peddling, secret meetings, refusal to disclose information to the citizens (under the guise of protection of privacy) - and plain old fashioned greed.

Posted by Larry Hubich at 09:34 No comments:

Today (June 4, 2008) the government of the Yukon territory announced that it is rejecting invitations to join the seriously flawed, anti-democratic B.C./Alberta Trade, Investment and Labour Mobility Agreement (TILMA).