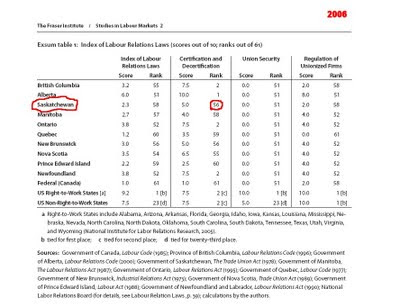 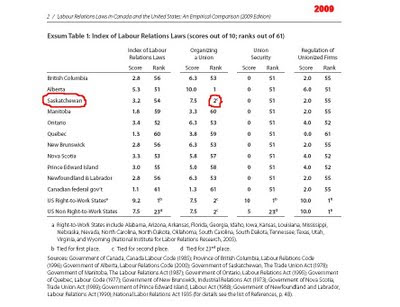 Posted by Larry Hubich at 18:42 No comments:

Boom and Bust: The Growing Income Gap in Saskatchewan 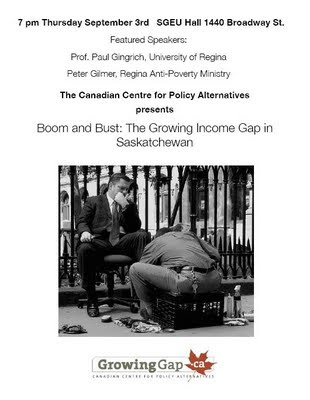 The Canadian Centre for Policy Alternatives presents
Boom and Bust: The Growing Income Gap in Saskatchewan

Wall government under the complete control of Sask. Chamber of Commerce 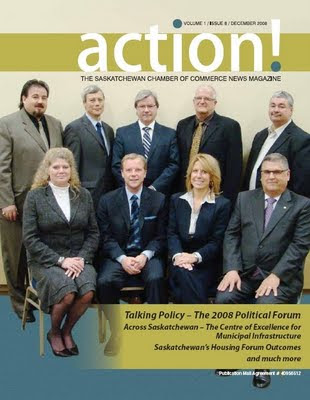 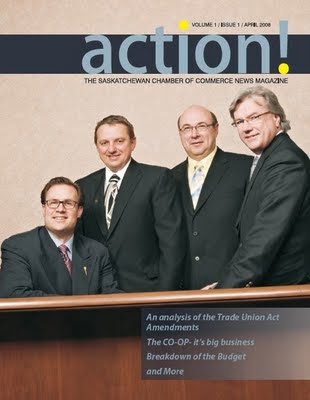 The Saskatchewan conservative government led by Sask. Party Premier Brad Wall is taking all of it's marching orders and direction from the Saskatchewan Chamber of Commerce. Wall's government is so deep into the hip pocket of the Chamber that they (the Chamber) might as well be called the "Real Cabinet". So much for democracy, accountablility, transparency, and legislating/regulating in the public interest.

In Brad Wall's Saskatchewan, it's corporations first - everybody else last.
Check out the latest posting over on the "Owls and Roosters" blog entitled: Bill 80: Wall government doing Saskatchewan Chamber’s and Christian Labour Association of Canada’s bidding with ‘unnecessary’ law
Posted by Larry Hubich at 10:01 1 comment:

The apple doesn't fall far from the tree

Veteran Regina Leader-Post political columnist, Murray Mandryk has written a recent piece entitled: Government made Devine error. In the column, Mandryk compares the Brad Wall (Sask. Party) conservative government to the most corrupt and incompetent government in Saskatchewan's 100+ year history - the Grant Devine conservative government of the 1980's.
.
Are Saskatchewan citizens headed for yet another economic calamity and financial straight jacket due to another ideologically driven and incompetent government? Is the current government (which is totally and completely laden with former Grant Devine loyalists) capable of changing it's spots?
.
Only time will tell. Don't hold your breath.
Posted by Larry Hubich at 20:03 2 comments:

What it takes to be number one - The Real News

"What it takes to be number one

The nickel miner strike in Sudbury, Canada is about to enter its seventh week, and there is no sign that the company, Vale, is willing to compromise on its demands for concessions. This despite the fact that the demand for nickel has surged causing the price to rise and Vale to default on at least one contract. Worker's argue that the mine is hugely profitable, sighting $4B in profit made in Sudbury alone over the past two years, but as Industry Analyst Marin Kotusa explains, being profitable is just not enough. "You have to be number one in all sectors," he says, referring to the requirements for victory in the global mining game, in which the winners are the ones who integrate all facets of the supply chain, not just mining, into their business. This requires extracting as much profit as possible in order to finance the necessary expansion into other sectors, lest be gobbled up by one's competitors. The union however, believes that the federal government of Canada ought to protect its people against such threats, and that work can be done to unify unions around the world to even the playing field." - For more information visit The Real News Network.

Posted by Larry Hubich at 20:48 No comments:


"Making the Links and Wolf Sun productions have teamed up to put together this video message to Americans. While Americans have heard many ominous accounts of Canadian health care, this video provides important information on health care in Canada. It features Roy Romanow, former Saskatchewan premier and commissioner of an investigation into the future of health care in Canada, Danielle Martin, President of Doctors for Medicare, Linda Silas, President of Canadian Federation of Nurses Unions (CFNU) President, and Stephen Lewis, a prominent leader in Canadian Health policy."

They're lying about Canada 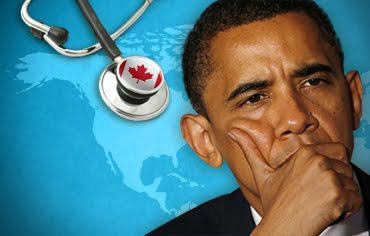 American corporations are spreading lies about Canadian health care to kill Obama's health plan -- and with it his whole movement for change.

Sign a message to Americans about how Canada's system really works - and how much we value it. Let's set the record straight!

Posted by Larry Hubich at 21:09 No comments:

The fight for a new union law - Leo Gerard, USW

Posted by Larry Hubich at 07:43 No comments:

The food lobby goes to school: Corporate pigs at the trough

Posted by Larry Hubich at 07:10 No comments:

Can someone please explain to me why an employer can be prosecuted and fined for being in violation of the Saskatchewan Labour Standards Act by bouncing a couple of wage cheques as was the case with Tri-Star Security Innovative Security Services Inc. (see: Ministry of Labour website at: Enforcement, Accountability and Performance Measures).

And yet a different employer (Poverino's Pasta Grill) can be found in violation of the same Labour Standards Act for ripping off over $62,000.00 from 135 young workers and nothing happens? (see: Wage Theft in Saskatchewan).

Why isn't the Brad Wall government enforcing labour laws when it would benefit young workers? Why doesn't Labour Minister Rob Norris instruct the Ministries of Labour and Justice to prosecute Poverino's?
Posted by Larry Hubich at 13:35 No comments:

Reproduced below is a letter to the editor which has gone out to the mainstream media regarding the dismal and incompetent budget of the Sask. Party Government.

The letter was prepared by NDP Finance Critic, Trent Wotherspoon and was forwarded to me on his behalf.

The Wall government has created a financial mess, but their friends in the corporate news media are busily trying to cover for them. Editorial pages and columnists suggest the government 'had no way of knowing' that its budget forecasts were so faulty, while others argue the situation 'still isn't too bad'. It's time for both the government and its cheerleaders in the corporate media to face reality.

The facts are these. The Wall government forecast $1.9 Billion in potash taxes and royalties this year to balance its budget; a few months later that number is off by 67% or $1.3 Billion! The government based its budget surplus on a forecast of 2.1% economic growth for this year; a few months later they've adjusted that to .6%! The result is that the government had to bleed our public utilities for $480 Million in dividends, and our so-called 'rainy day fund' for another $399 Million, just to maintain the façade of a balanced budget.

These problems are of the Wall government's own making. When its budget was introduced last March, the NDP pointed out the potash revenue projections and economic growth forecasts were out of whack with reality, and private sector forecasts. We urged the government to get its runaway spending under control. Government spending today is 32% higher than in the last NDP budget in 2007.

We urged the government to reconsider its fantasyland budget plan. It scoffed at our warnings and blindly pushed on. Today, Saskatchewan people are being asked to pay the price for the Wall government's fiscal incompetence.

It is worth noting the government created this mess during a time of unprecedented resource wealth for our province. They inherited a booming economy and record resource revenues from the NDP, but during this period they have drained our so-called 'rainy day' fund from more than $2 Billion to only $800 Million. A competent government would have grown the 'rainy day' fund during the boom times, but this crew has blown more than half of our cash reserves at the height of the boom!

Now the Children's Hospital has been delayed another year or more, and school repair projects have been put on hold so the Wall government can continue to pretend that it knows how to balance the budget. Shame on them and shame on the corporate news media for defending this kind of fiscal incompetence!

You deserve better - Join a Union!

Posted by Larry Hubich at 04:08 No comments: