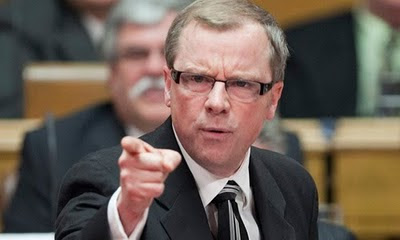 Six months ago the United Nations International Labour Organization (ILO) found the Sask. Party government guilty of violating the international human rights of Saskatchewan citizens by their introduction and passing of the anti-worker Bills 5 & 6.

In it's decision, the ILO called on the Wall government to (amongst other things):

- Hold full and specific consultations with unions at an early stage of considering any labour legislation...

- Take the necessary measures in consultations with unions to amend the Public Service Essential Services Act and Regulations...

To date, the government has complied with none of the recommendations and it's inaction continues to sully Saskatchewan's reputation on the international stage.

Recently, the government responded to a number of written questions about the ILO's recommendations which were tabled by the NDP opposition in the spring session. A summary of those questions and responses is reproduced below:

Question 1648: Has the Premier read the International Labour Organization decision?
Response: The Premier and cabinet have been briefed by the Minister responsible for Labour on the ILO Recommendations.

Question 1653: Has the Government of Saskatchewan contacted the union complainants to invite them to work with the government in complying with the ILO?
Response: No.

Question 1654: (1) Has the Premier given instructions to the Ministry of Justice and Attorney General to comply with the ILO decision? (2) If so, when? (3) If not, why not?
Response: (1) No. (2) N/A. (3) The Government of Saskatchewan remains confident that the various challenges now before the Labour Relations Board and the Courts will result in decisions that will confirm the Government has acted in a lawful manner.

Question 1655: What is your advice to this Legislative Assembly on whether we are going to be complying with the rule of law and international law as decided by the United Nations' ILO governing body?
Response: The Government of Saskatchewan is considering the non-binding recommendations of the International Labour Organization and will prepare a response in due course.

Would the Sask. Party government be ignoring a decision of a NAFTA panel, or the WTO if Saskatchewan was found guilty of violating an international trade agreement? I doubt it. So why the double standard when it comes to our international obligations respecting worker rights and human rights?
Posted by Larry Hubich at 23:24 3 comments:

Privatization: The wrong direction for patients

We Were There - Women and Labour History

Check out Bev Grant and the Dissident Daughters
Also see: www.bevgrant.com
Posted by Larry Hubich at 19:51 No comments: 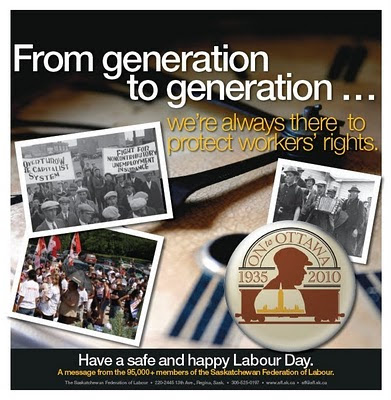 The young workers at SFL Summer Camp have interesting stories to tell about the kind of training they receive at work. Most had received very little on-the-job training; some had received no occupational health and safety training whatsoever. We know from Workers’ Compensation statistics that our youth are working in dangerous jobs. Thanks to the Wall government, they are also working as young as age 14. Let’s not further exploit our young workers, and our minimum wage earners who are already the lowest paid in the province, by implementing a discriminatory training wage.
Larry Hubich
SFL President
To download a copy of the Petition against the training wage, click here....
Posted by Larry Hubich at 19:35 No comments: