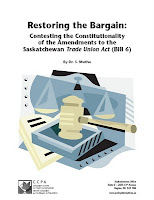 The Canadian Center for Policy Alternatives (Saskatchewan Branch) has just released a comprehensive study by Dr. S. Muthu, Professor Emeritus, University of Regina which confirms that the changes made by the Brad Wall government to the Saskatchewan Trade Union Act in 2008 (commonly known as Bill 6) violate the Canadian Charter of Rights and Freedoms.

Regina — The Saskatchewan office of the Canadian Centre for Policy Alternatives is releasing University of Regina business administration professor S. Muthu’s study, Restoring the Bargain: Contesting the Constitutionality of the Amendments to the Saskatchewan Trade Union Act, a thorough analysis of the constitutionality of the province’s labour legislation. This study represents an important contribution to the current debate over the extent to which legislatures can limit workers’ rights and freedoms. The study also thoroughly evaluates recent Supreme Court decisions, with emphasis on the Dunmore decisions and Health Services et al v. B.C. to determine if recent guidance by the Supreme Court will uphold Bill 6.

Muthu concludes that Bill 6 amendments to the Trade Union Act S.11(1)(a) are in violation of sections 2(b), 2(c), 2(d) of the Canadian Charter of Rights and Freedoms. Furthermore, Muthu contends that these changes are not saved by the constitutional test under Section 1.

He says rather than representing a “rebalancing of powers,” as the government insists, instead “unions’ and employees’ freedoms have been infringed while employers’ freedom have been enhanced.”

The effect of Bills 5 and 6 “provide the employer with a double barrel gun – freedom of speech enhancement at critical organizing moments and mandatory requirement of certification elections – with a lot of ammunition, resulting in practically an open hunting season on unions.”

Download the complete study here...
Posted by Larry Hubich at 08:14

Nice site, very informative. I like to read this.,it is very helpful in my part for my criminal law studies.