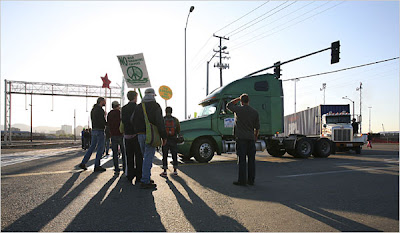 Jim Wilson/The New York Times
On May 2, 2008 the New York Times ran this article about the May Day protest of the International Longshore and Warehouse Union against the U.S. war on Iraq. The protest shut down the west coast ports on May Day as thousands of Longshore workers refused to report for work.

ILWU’s War Protest Shuts West Coast Ports
.
By WILLIAM YARDLEY
.
Published: May 2, 2008
.
SEATTLE — West Coast ports were shut down on Thursday as thousands of longshoremen failed to report for work, part of what their union leaders said was a one-day, one-shift protest against the war in Iraq.
.
Cranes and forklifts stood still from Seattle to San Diego, and ships were stalled at sea as workers held rallies up and down the coast to blame the war for distracting public attention and money from domestic needs like health care and education.
“We’re loyal to America, and we won’t stand by while our country, our troops and our economy are being destroyed by a war that’s bankrupting us to the tune of $3 trillion,” the president of the International Longshore and Warehouse Union, Bob McEllrath, said in a written statement. “It’s time to stand up, and we’re doing our part today.” (Read more....)