SFL Labour Day message - Fight for the right to be union 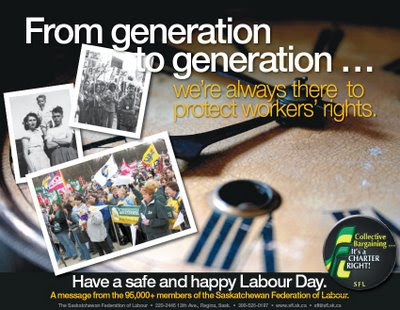 Saskatchewan Federation of Labour President Larry Hubich says workers should stand tall this Labour Day and fight for their right to be union.

“We also know that unions and their members do so much more for our wider communities, through our volunteerism, our work with the Labour Councils and through our partnership with the United Way, to name just a few. Union members love their province and they serve it with pride. That’s something to celebrate this Labour Day,” added Hubich.

“Unfortunately, the Sask. Party government has made it perfectly clear that they want to see unions disappear. They passed a law, Bill 5, which totally undermines collective bargaining for public sector workers, many of whom need these negotiations to keep up with the increases in the cost of living. The other new Sask. Party law, Bill 6, makes it extremely difficult to organize new unions. That means no voice and no representation for Saskatchewan’s most vulnerable workers. What kind of government wants to attack the rights of the hard-working citizens of this province?” adds Hubich.

Labour Day was born over 130 years ago, when demonstrators from 27 unions took to the streets and demanded that their brothers from the Toronto typographical union, who had struck for a nine-hour workday, be released from prison. Thousands of citizens flocked to the protests in support of the right to legally belong to a union.

“We are now engaged in a renewed struggle for the right to be union. It may be technically legal to join a union and to be in a union, but the core activities of what make us who we are, collective bargaining and organizing, have been decimated. The new labour environment is tipped so heavily in favour of the bosses that workers will be hard-pressed to keep up, let alone make gains. This Labour Day, the SFL pledges to continue the fight for the right to be union. We’ll fight in the courts, and as always, we’ll fight on the picket line and on the shop floor,” adds Hubich.

Download a PDF version of the statement here.
Posted by Larry Hubich at 21:53