Viterra desperate to recruit 'Scabs' in attempt to bust Union 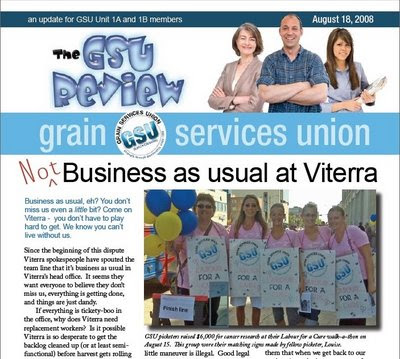 Regina, Saskatchewan based grain company Viterra Inc. is so desperate to try and bust the Grain Services Union (GSU) that they have resorted to attempting to recruit 'Scab' labour through the use of 'full-length newspaper ads' in the major dailies along with a series of new 'Scab' position postings on their corporate web-site.
.
GSU has responded by preparing an issue of their daily strike tabloid: The GSU Review - August 18. That issue is dedicated to exposing the company's 'Scab' recruitment efforts.
In addition, the GSU has posted correspondence on their web-site including a copy of the legal opinion they received which confirms that Viterra is very likely engaged in illegal activity through their anti-employee, anti-union, scab recruitment efforts.
What's next from Viterra?
Posted by Larry Hubich at 22:52

What's next - inserting "plants" on the picket line to cause trouble for the striking workers? C'mon people we've seen this all before.
Just sit down at a table and negotiate - how long did it take Viterra to negotiate the incredible salaries of their execs???

Hate to burst your bubble Larry, but nearly all of the posted positions require professionals with advanced degrees in business, accounting, or computer science. Those occupations aren't generally unionized anyways, so they are not hiring 'scabs'.

To Fraud: The only bubble you burst was your own. You are suggesting that people working for Viterra with "advanced degrees in business, accounting, or computer science" would not be covered by the GSU collective agreement, or would not be union members.

Perhaps you should aquaint yourself with the GSU/Viterra collective agreement, and the scale of classifications and wages before making that kind of unfounded statement. GSU has represented employees with those types of academic qualification for decades already.

Further, I'll have to check with some of our affiliated union members from the University of Saskatchewan Faculty Association (over 1000 of them, almost all of whom hold Masters Degrees or PHD's in their respective disciplines) to see if they agree with your assertion that advanced degrees precludes them from the benefits of unionization.

Care to place a wager on their answers, Mr/Ms Fraud?

Or I could simply check with some of the other tens of thousands of Saskatchewan union members who are "professionals" and hold degrees in a whole host of disciplines - to see what they think.

Mr. Hubich, I used to work for the Saskatchewan Wheat Pool as a professional, and I was considered out-of-scope by virtue of my status as having been recruited into a professional position. In my case, I was in the field of Information Technology management.

The codes of ethics for many professions, including Accounting, Engineering, and Law specifically forbid membership in trade unions unless those unions are exclusive to professionals. Why? Because members of those professions have professional obligations that potentially would result in conflicts of interests. As a (professional) engineer, for instance, I have been called upon to create and implement technology that has results in the loss of jobs for unionized men and women, even though I am not a manager of people per se. Imagine the conflict-of-interest inherent if I was forced, as a member of a union, to consider the jobs of my fellow union members, against loyalty to my employer. That is why Engineers, Accountants, Lawyers, and other professionals are almost universally excluded by law from collective bargaining units.

Fraud, What a coincidence - I too used to work for Saskatchewan Wheat Pool in the Information Technology Division prior to going on staff with the GSU. Both of these preceded my election to the position I currently hold.

Part of my job as a GSU staff member was evaluating positions on behalf of the union when the company submitted those through their compensation and classification manager in H.R. I can assure you, "so-called professional status" or designation had nothing to do with the determination of the scope line. (Either by H.R. management, or by the union.) If you in fact did work for the Pool in the field of Information Technology management (as you suggest) you must have been recruited to a position at a level higher than Sr. Business Systems Analyst. (Grade 18 In Scope - at a current top salary of $72,336.)

As for your other suggestion that "Engineers, Accountants, Lawyers and other professionals are almost universally excluded by law from collective bargaining units" - perhaps you could tell me which specific "law" you are referring to, I'm not familiar with it.

Your "conflict of interest" argument is equally flawed. I'm not certain that a "so-called professional association" prohibition against a member holding a union card would stand up to a constitutional challenge under the Freedom of Association provisions of the Charter. I don't believe it's ever been tested.

p.s. I know lots of Lawyers and Accountants who are union members.

Now I understand why you've picked the blogging alias that you have.

Good for you, Larry!

Shame on you, fraud. Do some simple research, and you will find just how ignorant and insulting your comments/views are. Good choice of username! Congratulations.

From a Registered Social Worker, who is also a MSW student, and proud member of two unions.

I passed our little blog exchange along to the President of CEP 911. That union local represents the employees at ISM Canada.

He responded as follows:

You can pass this information on to Mr. or Ms. Fraud:

ISM Canada employs people with a range of education beginning with Grade 12 up to and including the PhD level. CEP Local 911 is the union that represents all of these people. About 5 years ago, our local union boasted a Recording Secretary that held a Doctorate. Our Treasurer held a Masters Degree (Mathematics) and was working towards his PhD at the time. In fact, none of our software engineers and other computer professionals have ever had a problem associating with high school grads in a trade union. We call it "solidarity". And, incidentally, we consider ourselves the agents of technological change. Our job protection comes from a well-crafted collective agreement and an understanding that high tech workers must constantly upgrade their skills and education.