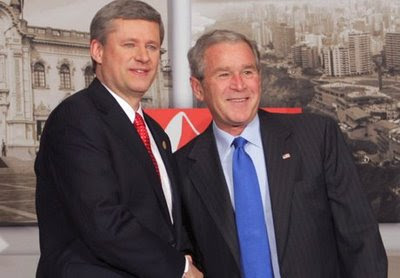 The mainstream media is buzzing in anticipation that the Canadian opposition parties will form a coalition next week to topple George W. Bush's best buddy - Canadian Prime Minister, Stephen Harper.

It appears that the Harper government is steadfast in it's determination to bankrupt the opposition by removing their public funding under the phoney excuse of the economic downtown. An economic downturn brought on by the policies of the likes of Bush and Harper: deregulation, privatization, corporate greed, and war-mongering.
It's reported that Federal Finance minister, Jim Flaherty is saying the government will not back down from it's plans to financially hobble the opposition, nor are they prepared to back-off of their proposed 50 Billion dollar tax reduction gift to the same corporations who are the architects of the economic mess the world is in today.
I figure that Harper and crowd are so freaked out by the mess their policies have created that they don't want to be the government that is charged with responsibility of cleaning it up. After all, it's going to take economic stimulus and deficit financing to get the economy out of our corporate greed created financial collapse.
Harper et al, would rather be sitting in the opposition benches sniping and taking shots then rolling up their sleeves and fixing the mess.
Stay tuned it's going to be an interesting week.
Coverage of the issue:
CTV - Chretien, Broadbent brokering coalition deal
Montreal Gazette - Coalition could topple government
Globe and Mail - Angry opposition parties holding coalition talks
CBC - Chrétien, Broadbent brokering possible coalition: reports

Well with our two statesmen - Broadbent & Chretien - doing the behind the scenes "arranged marriage" I'm feeling like "yes we can" Larry.
It's a good day for our good old pluralistic democracy - working accord baby!

P.S. Strategic voting didn't get her done but looking "death in the face" at the edge of the cliff sure makes one consider the options.

Hmm...Larry, I'm not quite sure I agree with your sentiment that Harper would rather sit in the Opposition benches. This is a man with an immense drive for power and I think he would see this as a defeat.

My thinking is that he took another gamble, thinking Dion would be a lame duck, and the gamble backfired. I might have made the same gamble, given the recent history of the Liberal Party!

It remains to be seen whether the coalition will come together, but with Chretien and Broadbent at the table we should, at least, see "Canada" at the table.

Yup! Harper got skeert! But now I have to wonder if the parties in Opposition stop talking coalition?