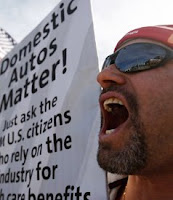 If you've ever wondered why right-wing political parties, and the business crowd that supports them hates unions, there's a great article by Art Levine posted on both truthout.org and the Huffington Post explaining it. It's reproduced below:

The Hoover-like GOP has been working overtime to oppose President Obama's stimulus package while hoping he fails. Meanwhile, a report released yesterday by the Center for American Progress Action Fund essentially underscores the real reasons Republicans and the business community have taken another equally short-sighted economic stance: fighting workers' right to organize. As Unions Are Good For the American Economy points out with irrefutable statistics, unionization raises wages and boosts the economy because it puts more money in the pockets of American workers.

(The report itself, of course, doesn't directly accuse the GOP and corporate interests of opposing economic growth and recovery, but reading its measured analysis of the economic benefit of unions leads to the inescapable conclusion that anti-union business leaders have a misguided zeal for low wages at all cost - regardless of the impact on their own workers, their firms' productivity, their own long-term profits or the broader economy.)

In a conference call with reporters to discuss the report, former Labor Secretary Robert Reich observed: "One reason we're in the crisis we're in is because consumers have run out of money.... If they can't borrow anymore, and they have to rely on sinking wages, the entire economy is in trouble, because there's not enough demand out there." Reich added, "The point of the Employee Free Choice Act is to end intimidation and allow workers to join unions as they have a right to do. Workers want to be in unions [nearly 60% say they'd join if they could], and if they did have unions, they'd have higher wages and benefits. And if they had higher wags and benefits, they'd have the purchasing power to buy more goods and services."

In fact, the relative stagnation of wages over the last few decades - due in large part to effective unionbusting aimed at keeping labor costs low - helped bring on the economic meltdown because too many low-income workers were suckered into mortgages they really couldn't afford. Those mortgages were in turn bundled into the "toxic assets" - those various nearly-worthless investment vehicles - that have weakened the world's financial systems and brought on our free-fall recession. As Daily Kos diarist Trapper John reported last year, "AFL-CIO Associate General Counsel Damon Silvers lays out how the decline in unionization which began in the mid-Seventies led to the burst of the sub-prime bubble, and ultimately to today's recession. And he wrote it way back in April."

In contrast, this new Center for American Progress report points out, if unionization rates today were the same as they were in 1983, an additional $49 billion could be pumped into the economy by workers represented by unions. As the report co-authored by David Madland and Karla Walter says, "In 1983, 23.3 percent of American workers were either members of a union or represented by a union at their workplace. By 2008, that portion declined to 13.7 percent." And, as Reich and the report noted, "Workers in unions earn 30% higher than non-union workers."

As Beth Shulman, author of The Betrayal of Work, observed during the conference call: "A union job transforms a low-wage job into a good job" - and a pathway to the middle-class. And those workers will be able come into showrooms, real estate offices, auto dealerships and stores across America to start buying again and paying down-payments for a home. Shulman quoted a grocery store worker who joined a union, Linda, telling her, "For the first time, I can dream for my child," and who started putting away money for her child's college education. "Having unionization gives people a stake in the American dream," Shulman said.

But, as usual, big businesses and the GOP have taken a short-term, greedy look at their economic self-interest and determined they must fight the Employee Free Choice Act with all the weapons at their disposal. These include $200 million worth of smear ads , lobbying and misleading talking points; they're claiming (falsely) that it takes away the secret ballot and will wreck the economy.

Yet, as Shulman says, "The business community knows the basic facts that are in this report: when workers have unions, they have better wages, they have better benefits, they have a voice in the workplace, so it's not surprising they would take a hard line with this. This [bill] is important to ensure a road to the middle class and a right to organize." She's confident that the goals of the legislation will trump corporate special interests and right-wing ideology: "Clearly, it will get passed, because it's in the interest of working America."

And as Walter and other pro-union advocates point out, a level playing field for union organizing helps the economy. The higher wages paid by unions boosts productivity, reduce turnover and can even improve profits. Partially unionized Cosco, she says, has nearly 40% more in labor costs than its sister company, Sam's Club, but has almost double the per-employee profit margin. "They invested in the jobs and lowered turnover," she observes.

In fact, even the Heritage Foundation's much-hyped index of "economic freedom" in countries around the world pointed to economies with the highest rates of unionization in the workforce.

As for the right-wing's favorite whipping boys, the auto industry and the UAW, Walter and other experts say the blame should fall on the executives' poor manufacturing decisions - not the 10 percent of a car's cost made up by labor costs. And, despite the demonization of the UAW, the American auto-industry workers' wages are now roughly comparable to those in non-unionized Japanese factories, but it's the added costs of health care and pensions for union retirees over the decades that have actually raised costs. In addition, as the latest restructuring and cost-cutting plans show, the UAW has been willing to compromise - after giving up important gains in negotiations in earlier years.

The important new report shows that the original goal of the UAW - helping their workers achieve a decent, middle-class standard of living while working in factories - could also help today's low-paid workers, especially in the growing service and health-care sectors, boost their incomes if they had the right to join a union. As the AFL-CIO Now blog reports:

The report also provides a state-by-state analysis of increased union membership on wages. An increase in the rate of union membership of just 5 percent would increase total wages by $176 million in Nebraska, $503 million in Wisconsin and $852 million in Pennsylvania. These wages would be spread across the entire labor market.

"The essence of what labor unions do - give workers a stronger voice so that they can get a fair share of the economic growth they help create - is and has always been important to making the economy work for all Americans. And unions only become more important as the economy worsens.

"One of the primary reasons why our current recession endures is that workers do not have the purchasing power they need to drive our economy ... what is sustainable is an economy where workers are adequately rewarded and have the income they need to purchase goods. This is where unions come in."

Walter and Madland point to the disconnect between productivity and wages as a major factor in our economic crisis. Indeed, if wages had kept pace with productivity increases, rather than falling behind as they have in recent decades, average wages would be 42.7 percent higher. That's a sizable share of the economy that workers have lost, undermining consumer purchasing power and economic security - which, in turn, hurt the nation's entire economy in a vicious downward spiral.

That's why protecting union rights becomes so critical to economic recovery. As Karla Walter summed up her research, "The Employee Free Choice Act is not only important because it makes it harder for anti-union companies to harass workers, it boosts unionization rates, and improves millions of Americans' economic standing, providing families of those with union jobs a path to the middle class and pumping billions into the American economy every year."

At the heart of all this is a drive for fairness and a level playing field for workers - the right to bargain for decent pay and benefits. As Stewart Acuff, the special assistant to the president of the AFL-CIO, says caustically, "If the bosses can bargain with their boards of directors for their $200 million salaries and $10 million bonuses while they were screwing up their companies, workers ought to be able to bargain for their kids' health care and wages they can count on."

Art Levine co-hosts "The D'Antoni and Levine Show" on BlogTalk Radio at 5:30 p.m. ET, every Thursday, then archived online. This week's guests, Berkeley economist Brad DeLong and the Campaign For America's Future senior fellow, Bernie Horn, explain President Obama's bailout, stimulus and recovery packages - and the political fights over them.

I recently came accross your blog and have been reading along. I thought I would leave my first comment. I dont know what to say except that I have enjoyed reading. Nice blog. I will keep visiting this blog very often.