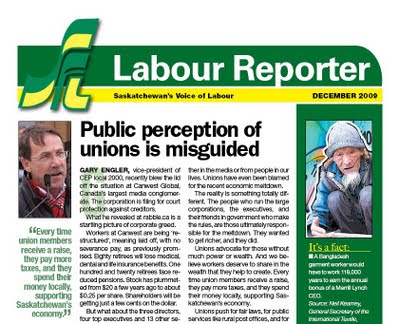 Gary Engler, vice-president of CEP local 2000, recently blew the lid off the situation at Canwest Global, Canada's largest media conglomerate. The corporation is filing for court protection against creditors.
.
What he revealed at rabble.ca is a startling picture of corporate greed.
.
Workers at Canwest are being 'restructured', meaning laid off, with no severance pay, as previously promised. Eighty retirees will lose medical, dental and life insurance benefits. One hundred and twenty retirees face reduced pensions. Stock has plummeted from $20 a few years ago to about $0.25 per share. Shareholders will be getting just a few cents on the dollar.
But what about the three directors, four top executives and 13 other senior managers at Canwest? They're walking away with over $9.8 million in bonuses, and retirement benefits for life. Yes, bonuses, on top of already exorbitant salaries.
Canada's legal system allows for this to happen.
So what does this have to do with unions? Well we've all heard the accusations that unions are greedy, either in the media or from people in our lives. Unions have even been blamed for the recent economic meltdown.
The reality is something totally different. The people who run the large corporations, the executives, and their friends in government who make ther rules, are those ultimately responsible for the meltdown. They wanted to get richer, and they did.
Unions advocate for those without much power or wealth. And we believe workers deserve to share in the wealth that they help to create. Every time union members receive a raise, they pay more taxes, and they spend their money locally, supporting Saskatchewan's economy.
Unions push for fair laws, for public services like rural post offices, and for industry regulations to keep products and services safe.
Let's respond to those falsehoods. The answer is found in our trade union principles: "An Injury to One is an Injury to All." Be proud to be union.
Click to download the December 2009 issue of the SFL Labour Reporter.
Posted by Larry Hubich at 22:32

Nobody denies that unions have protected the worker over the years when unscrupulous employers try to take advantage of them, fair enough.

However, unions today have become parasites in many cases insofar as they take from the host (employer)without regard to the helth of the host and in some cases have caused the demise of the business destroying themselves in the process. Unions and employers need to take a step back, get rid of the constant adversarial confrontational form of negotiations. At the end of the day we all want to be treated fairly, and some of the unions certainly do not play fair and need to stop painting themselves as the victim.