Canada's guest workers - Not such a warm welcome

The temporary foreign workers pouring into Canada are often exploited 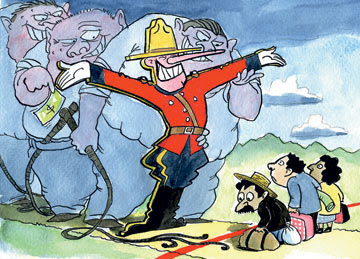 Illustration by Claudio Munoz
Excerpted from The Economist:

"TIMES had caught up with the sprawling brewery in the town of Barrie, an hour's drive north of Toronto. Canadians were drinking less and less beer, especially the traditional mass-produced brands. So Molson, the biggest of them all, closed the brewery and sold the property. The new owners were soon pandering to a different vice—marijuana. When police raided the plant in 2004, it was producing four crops a year of 30,000 high-grade, hydroponically-grown plants, worth around C$100m ($102m)."

Read the rest of the article by clicking here:
Posted by Larry Hubich at 19:41