It's raining taxpayers money on the RICH! 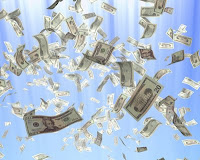 "With the Dow Jones safely tucked in back down below 9000, and European exchanges losing 7% on average, the positive overall global effect of an unprecedented transfer of public funds to the private sector, to the tune of some $4.5 trillion, has lasted about a day and a half.

The $4.5 trillion could have been used to the benefit of the people it rightfully belongs to, the same people who will soon desperately need every singly penny of it. Instead, it has been given away, and is now no longer available to help in what is cynically called "the real economy".

And that is where the reason for today’s plunging stocks lies: the real economy, in the real world, where the real people live. Unfortunately for them, financial decisions are all taken by those who live in other universes, for whom the real world has no meaning without the world of finance, who are under the illusion that their multi-million bonuses exist for the good of the people.

A nice way of putting it is this: “If you spent $1 million per day from the day Jesus was born until Christmas 2008, you would have spent $733 billion”. In other words, you could have spent a million a day for 12,000 years, and still not get to the amount spent in the past 5 days."

Read the rest by clicking here....
.
And while you're at it, you might as well read this article on globalresearch.ca: Why the Bailout Scam Is More Likely to Fail than to Succeed
Posted by Larry Hubich at 23:12

Christ himself said: 'there will be poor always'.

Think you can do more than Christ Larry?