Canada's reputation going down the toilet 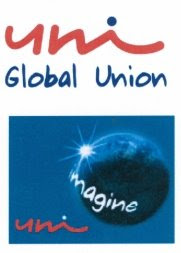 On December 3, 2008 the General Secretary of UNI Global Union (representing some 20 million workers in 150 different countries) wrote Canadian Prime Minister Stephen Harper denouncing the recent signing of the "so-called" Canada-Colombia Free Trade Agreement. You can download a copy of the PDF version of that letter by clicking on the UNI logo to the right. It is also reproduced below in text format.

What a global embarassment Canada is becoming under the leadership of Stephen Harper. We are rapidly replacing George W. Bush as the country nobody wants to be seen in a photo with.

On behalf of UNI Global Union I express our dismay that your government has entered a free trade agreement with Colombia.

Colombia is the murder capital of the world for trade unionists. There is no other place in this planet that poses as many threats and dangers to trade unionists. Acts of murder and violence are perpetrated with impunity.

There is an almost total absence of the judicial pursuit of those committing crimes against trade unionists, of the thousands of cases before the authorities decisions have only been made in a handful of cases.

This year UNI lost one of its local bank union leaders Leonidas Rojas who was murdered in his own apartment. THe government investigator initially claimed, as they have so often done, that this was a crime of passion. Yet just days ago a paramilitary group claimed responsibility for his murder. The same group declared that Geneva based ngo's, such as UNI Global Union, that have worked to protect trade unionists in Colombia are now a legitimate military target. Your trade agreement only brings succour to such anti democratic and violent groups.

The Canadian government should have used these trade talks as an opportunity to create leverage to ensure that basic trade union and human rights in Colombia were fully respected and allowed to flourish. That you have chosen not to do so is a blow to Colombian workers and their trade union organisations.

Your government has chosen to sign an agreement when the murder of trade unionists is on the rise. The violation of trade union rights has created a climate of fear that has effectively destroyed collective bargaining in Colombia. This coupled with the absence of a social safety net has left millions of Colombians marooned in poverty. The benefits of trade will only assist the current business elites.

On behalf of our 20 million members in 150 countries I express our outrage that your government has signed an agreement which will do precious little for the Colombian people and perpetuate a culture of brutality and death in the country.

I have the highest regard for Canada and its people, sentiments which I shared with the 2008 Governor Generals Leadership Conference which I addressed in Alberta this June. This future generation of Canadian leaders was shocked to learn of the tragedy that is Colombia today. We regret that your government has pursued a policy which will bring no practical benefit to those in peril or improve the lives of Colombian workers. I appeal to you to reconsider your position and nullify this agreement.