More Child Labour in Saskatchewan - do we really want to go there? 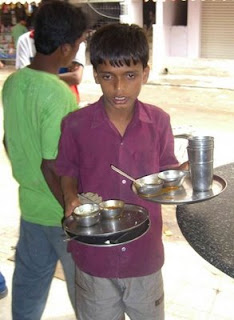 It's timely on this the 60th Anniversary of the Universal Declaration of Human Rights to take a good hard look at the reasoning for, and push behind, the government's stated intention of reducing the Minimum Working Age in Saskatchewan.

Yesterday, I couriered this letter to the Sask Party government's Minister of Labour (Norris) setting out the position of the Saskatchewan Federation of Labour respecting the matter of minimum working age. The SFL's position was informed by resolutions passed at our recent annual convention.
Canada (and Saskatchewan) have significant international obligations and commitments to comply with at least the minimum standards set out in conventions of the United Nations and it's agency the International Labour Organization.
Reducing the minimum age at which children are allowed to work will put us off-side with these international obligations. Do we want to be viewed as a "developed nation", or a "developing nation"?
Posted by Larry Hubich at 00:23

And, who doesn't want to catch up with a third world country - haven't you heard Saskatchewan has been in the dark ages? Haven't you heard we're behind the times? Its been all over the papers and talk radio... child labour seems the next best step.
And what the hell - let 'em work up to 30 hours a week - we're trying to start a new world order here, and we need some minions to start young.

What in your view is Child Labour?
For instance what age of a worker constitutes child labour? Does the level of pay make a difference, the type of work etc.

I mean I was doing flyer deliveries for my mom's business when I was 12 years old!
-Matthew

My view of Child Labour is consistent with that articulated by the UN International Labour Organization. You can view that here: www.ilo.org/ipec/facts/lang--en/index.htm

In Canada, as with other "developed nations" our minimum age laws should be (at the very least) consistent with ILO Convention 138. If you read my letter to Minister Norris you will see that clearly laid out. www.sfl.sk.ca/SFL_to_Norris_Minimum_Age_Dec_08.pdf


Working around home, assisting in a family business, doing chores on the family farm, all clearly fall outside of what would normally be characterized as child labour (child work).

I too earned a bit of money when I was younger than 16. For instance, I had a paper route in the small Saskatchewan town I grew up in. I used to mow lawns and shovel sidewalks for a few bucks when I was a kid. That's clearly not what is being contemplated by government related to this topic.

I do have some very real concerns about what the big push is to allow children under the age of 16 to work in places that are clearly not appropriate for young people to work in.

There are a whole host of issues related to working at any age, but even moreso for young workers. Like working in a safe environment, working with adequate staff and under appropriate supervision and coaching, not working alone. Being free from harassment and exploitation - whether that be physical, mental, psychological or sexual.

Adequate policing and enforcement of rights, including (but not limited to) labour standards, occupational health and safety, workers compensation, and human rights.

The current age limits - established, agreed to and legislated - were not arrived at arbitrarily or simply pulled out of thin air. They were arrived at through serious consideration, consultation, dialogue, and with an eye to our international obligations, and our moral and social responsibilities. And most of all, they were established in the interests of protecting our children, keeping them safe and free from exploitation, and ensuring that their education was and is the first priority.

Doing what Alberta and B.C. have done - which allows children aged 12 - 14 to work - flies in the face of our international obligations, is pandering to the demands of the corporate sector, ignores the dangers inherent in the workplace, and is, quite frankly, moving Canada in the wrong direction.

Many people (perhaps most) will be in the workforce until age 65 and older. Is it really necessary to get them started at 12, 13, 14 or even 15 for that matter?

Thank your again for your contribution to this blog.