Saskatoon StarPhoenix exposed as the pro-conservative, right-wing rag it is 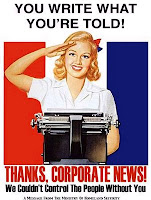 Wander on over to the "Owls and Roosters Blog" and read blog owner Joe Kuchta's newest posting entitled: "StarPhoenix says no to letter critical of Prime Minister Stephen Harper and the Conservative Party of Canada; think tanks receive special treatment".

In another one of his signature postings, Kuchta dissects the past record of the Saskatoon based paper and exposes the obvious bias and slant that dominates it's editorial and opinion pages. When reading Kuchta's posting, I encourage you to click on the links. What you find there will reveal a web of ultra-conservative ties, and connections to the who's-who in certain corners of the right-wing establishment.
So, the tip for today is: If you want to see your name gracing the pages of the Saskatoon StarPhoenix - write something with a "hard-right" orientation. That'll do it!
In closing, I just had to reproduce this astonishing quote from a letter Joe received from the StarPhoenix rejecting an article he had submitted for printing (you see, Joe's viewpoint was critical of Prime Minister Harper's handling of the recent events in Ottawa):

“Most of the points you are making in this proposed viewpoint have been made by other commentators and letter writers since this mess began to unfold. While it’s your style to carefully document dates and times of certain speeches or opinion pieces presented by someone over the years and then to use that person’s latest utterances as a demonstration of their perfidy, it does happen that people change their minds or are, especially in politics, forced to back track on earlier positions simply to survive - to wit, Harper and the Senate appointments.

“While you have every right to comment on contradictory positions taken by public figures, I don’t have the space to devote to this minute examinations and parsing of positions while people deluge us with letters pertaining to the same thing during breaking news events.

“By all means, send in your comments in a 250 word letter and I’ll be happy to consider it. As for the last viewpoint, sorry. It’s a no go.”