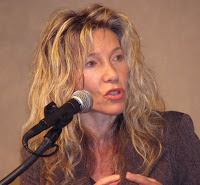 Award winning author, journalist, and columnist Linda McQuaig hits one out of the park with this recent column:

Financial elite have no shame
.
Even in face of crisis, they continue to push for tax cuts instead of stimulus.
.
- by Linda McQuaig
Dateline: Monday, January 26, 2009
.
Let's imagine, for a moment, how different the public debate would be today if it had been unions that had caused the current economic turmoil.
.
In other words, try to imagine a scenario in which union leaders – not financial managers – were the ones whose reckless behaviour had driven a number of Wall Street firms into bankruptcy and in the process triggered a worldwide recession.
.
[ Surely it's time to rethink this resistance to government acting as an agent of the common good. ]
.
Needless to say, it's hard to imagine a labour leader being appointed to oversee a bailout of unions the way former Goldman Sachs CEO Henry Paulson was put in charge of supervising the $700 billion bailout of his former Wall Street colleagues.
.
My point is simply to note how odd it is that the financial community has emerged so unscathed, despite its central role in the collapse that has brought havoc to the world economy.
.
Of course, not all members of the financial community were involved in Wall Street's wildly irresponsible practices of bundling mortgages into securities and trading credit default swaps. But the financial community as a whole, on both sides of the border, certainly pushed hard to put in place an agenda of small government, in which financial markets largely regulated themselves and citizens (particularly high-income investors) would be spared the burden of paying much tax.
.
The agenda advanced much further in the US, but had an impact in Canada, particularly on the tax front.
.
One would think that those who pushed this agenda so enthusiastically would, at the very least, be a tad embarrassed today.
.
But so influential are those in the financial elite – and their hangers-on in think-tanks and economics departments – that they continue to appear on our TV screens, confidently providing us with economic advice, as if they'd played no role whatsoever in shaping our economic system for the past quarter century.
.
Of course, we're told there's been a major change in their thinking, in that many of them are now willing to accept large deficits in today's federal budget, in the name of stimulating the economy.
.
While this does seem like a sharp departure from the deficit hysteria of the 1990s, a closer look reveals the change may not be that significant.
.
In fact, financial types have always accepted deficits – when they liked the cause. Hence their lack of protest over George W Bush's enormous deficits, which were caused by his large tax cuts for the rich and his extravagant foreign wars.
.
What they don't like is governments going into deficit to help ordinary citizens – either by creating jobs or providing much unemployment relief.
.
So the Canadian financial community has been urging that the stimulus package consist mostly of income tax cuts – even though direct government spending would provide much more stimulus and do more to help the neediest.
.
If the Harper government follows the financial community's advice, we will simply move further along with the small government revolution launched by Ronald Reagan in the early 1980s.
.
Of course, tax cuts are not the same as financial deregulation. But they are twin prongs of a bundled package aimed at reducing the power of government to operate in the public interest.
.
Surely it's time to rethink this resistance to government acting as an agent of the common good. And maybe it's time for a little humility on the part of a financial elite that long has enjoyed such deference while turning out to be so spectacularly inept.

That was the best article. Linda is such a dream writer.