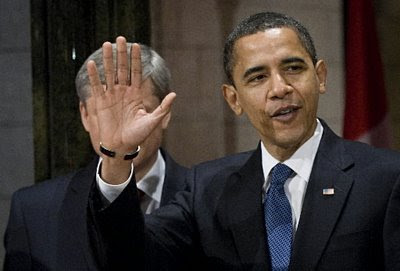 U.S. President Barack Obama (shown above) made a very important statement that sets him apart from leaders in some other countries.
.
He did this when he signed his first bill into law since taking over the Oval Office. (Shown below).
. 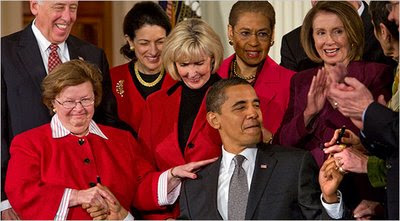 Canada's Prime Minister, on the other hand, isn't doing so good. The excerpt below is from the Canadian Labour Congress web-site:

"On February 6, 2009, the government tabled legislation that will radically change the rules governing pay equity in the federal public sector.

The Public Sector Equitable Compensation Act - which has been included as part of the omnibus Budget Implementation Act - will remove the right of public sector workers to file complaints for pay equity with the Canadian Human Rights Commission. It will transform pay equity from a human right to an "equitable compensation issue" that could be traded away at the bargaining table.

Pay equity is a fundamental human right that must not be taken away at a bargaining table where the federal government historically holds the balance of power. The Harper government has already demonstrated its commitment to legislating wage increases and undermining collective agreements. Now, women's rights will be on the chopping block.

The Public Sector Equitable Compensation Act will effectively eliminate women's ability to pursue pay equity complaints by forcing them to file complaints as individuals. This bill will also impose a $50,000 fine on any union that encourages or assists their own members in filing a pay equity complaint, leaving women to fight the system unaided. Since no individual can afford to do so, this will clearly be a mockery of justice.

The Public Sector Equitable Compensation Act won't help the economy or save jobs. Government officials have admitted that there's no proof it will save the government any money. However, it will prevent women in the federal public sector from receiving equal pay for work of equal value. It has no place in the budget."

And Iggy and the liberals did "cheap talk" but remained "silent" although Iggy keeps talking like he's a Obama wannabe.
Good post.

Your blog is really helps for my search and i really like it.. Thanks a lot..:)