Wall and Harper governments refuse to be open and accountable 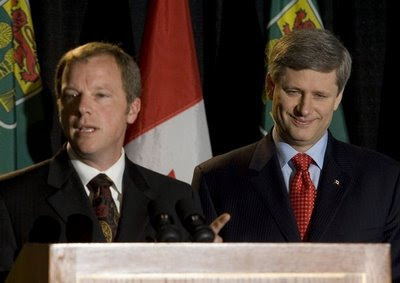 In what can only be described as the most secretive and anti-democratic actions a government can take, the federal and provincial governments led by Prime Minister Stephen Harper and Premier Brad Wall (Sask) have virtually shut down citizen access to public documents.

On the national scene, Globe and Mail reporter Campbell Clark has written a couple of articles in the past two days highlighting the secretive actions and refusals of access to information by the Harper government.
February 26, 2009: Government secrecy ‘grim,' watchdog says
February 27, 2009: Right-to-know law 'has no teeth'

"OTTAWA — The federal Information Commissioner is warning that Canadians' ability to get information from their government has reached a dire state.

The Harper Conservatives now routinely delay requests for government documents – a right of Canadians under the law – well beyond the 30 days that the Access to Information Act requires.

Six out of the 10 governments departments reviewed by the commissioner's office received failing grades.

“I do believe that its results provide a grim picture of the federal government's access to information regime,” Information Commissioner Robert Marleau says in a special report to Parliament."

Closer to home, the Brad Wall government continues to routinely deny and refuse "Freedom of Information" requests to Saskatchewan citizens as outlined by Saskatoon resident, Joe Kuchta, in the most recent posting on his "Owls and Roosters" Blog.
February 26, 20009: Advanced Education, Employment and Labour refusing access to Trade Union Act and Labour Standards Act records; 7th denial since May 2008

"“Integrity and accountability will be at the forefront of our dealings as a government, and in your work as a Minister of the Crown.”– Premier Brad Wall’s mandate letter to the Hon. Rob Norris, Minister of Advanced Education, Employment and Labour, November 7, 2007

The above words appear to mean little to the Saskatchewan Party government. For the seventh time since May 2008 the Ministry of Advanced Education, Employment and Labour (AEEL) has denied access to records under The Freedom of Information and Protection of Privacy Act in their entirety."

The above examples reveal a disturbing trend in hard-right ideologically based leadership. It is elitist, mean spirited, vindictive, anti-democratic, and the complete opposite of what these two men promised in their campaigns to be elected to the positions they now occupy.
In a 2004 speech to the Society of Professional Journalists in New York City, world renowned journalist Bill Moyers called government secrecy "Contagious, Scandalous, and Toxic". This was during the height of the George W. Bush era, and we all know the legacy left by him.
Are Canada and Saskatchewan headed in the same direction?
Posted by Larry Hubich at 04:56