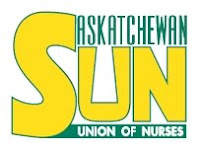 Today the Saskatchewan Union of Nurses (SUN) launched a constitutional legal challenge against the Brad Wall government's contemptuous assault on the Charter Rights of workers in this province.

As a first order of business, following election of his party in late 2007, Premier Brad Wall and his collegues introduced two pieces of legislation which attack the constitutional rights of workers in Saskatchewan. These worker rights are enshrined through numerous provisions of the Canadian Charter of Rights and Freedoms.
SUN's charges against the Sask. Party government are yet another condemnation of this government. A government that continues to arrogantly refuse to acknowledge it's legal responsibility to consult, in a meaningful way, with the democratic organizations that workers have formed to advocate collectively on their behalf.
You can download the SUN media advisory by clicking here....
You can download the SUN Statement of Claim by clicking here....
Further information respecting the SFL Charter Challenge of Bills 5 & 6 is available here....
.
Further information respecting the SFL ILO Complaint is available here....
Click here for Regina Leader-Post coverage of the SUN challenge.
Posted by Larry Hubich at 20:05

Hopefully SUN has learned what happens when you support the wrong political party!