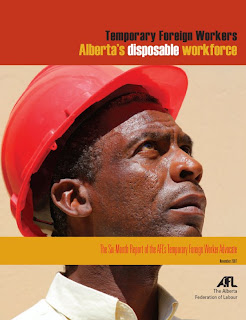 The report outlines the Advocate's activities, highlights the disturbing problems inherent to the Temporary Foreign Worker program, details the exploitation of numerous foreign workers across the province, and offers 21 recommendations for both the federal and provincial governments to fix the problems.
In six months, the Advocate took more than 1,400 calls and opened case files for 123 foreign workers. The Advocate also spent a great deal of time speaking about the foreign worker program and the exploitation faced by foreign workers to community groups, government, and others.
The Advocate concludes that the Temporary Foreign Worker program is an unmitigated disaster for both the people involved and for Alberta.
Click here to read the full report. (in Adobe PDF format)
Posted by Larry Hubich at 20:40