Canada named "Worst Country in the World on Climate Change" 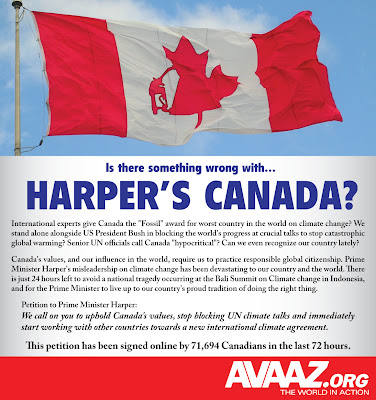 Canada's stance on climate change is a global embarassment.

"International officials and experts have named Canada the worst country in the world on climate change as a result of PM Harper’s climate plan: wreck any chance of an international agreement being reached at the UN summit in Bali this week.

PM Harper's short-sighted and corporate-driven policy on climate change has launched an attack on Canada's traditional role in the world. There's still a few days left to save our country, and the climate. Let's get a massive Canadian roar to remind our PM which country he's leading and what we stand for. Sign the petition, below calling on Harper to change Canada’s position at the Bali summit, and we'll advertise the number of signatures in an ad campaign across Canada this week. Sign the petition now!"

I don't know about the "roar" as much as I know about how effective the next election can be to reduce Harper to opposition status.