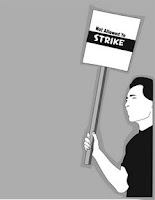 Freelance writer Stephen LaRose has just written a piece which appears in the January 17, 2008 issue of Planet S Magazine:

When Saskatchewan Federation of Labour president Larry Hubich calls Bill 5, the Saskatchewan Party government’s new essential services legislation, the worst bill he’s ever seen, Saskatchewan’s mainstream media simply chalk it up to a union leader playing politics with a government that’s perceived to be anti-union, and leave it at that.

It’s only when you actually talk to Hubich, and Saskatchewan Union of Nurses president Rosalee Longmoore, that you get an idea of what they mean." (read more....)

"....and guess who serves on the SLRB? Appointees of the Brad Wall government, that’s who..."

Good grief, whatever happened to 'the SLRB has representatives chosen from labour and employer in equal numbers and a neutral chair and co-chairs" (which, the last time I checked, all came from labour)?

And have there been any changes to the SLRB since the government changed?

Thanks for the comment. Please don't attribute that quote to me. I never said it. I guess it must be the opinion of the author.

But, in defense of his comment - the new Minister has suggested that he will be making changes to the SLRB and the appointments.

And, as for there being equal numbers on the LRB - there are. For instance, from the side peopl there are 9 from employers and 9 from labour.

Respecting the Chair and Co-Chairs - you are wrong. The current Chair came out of a well known management side law firm.

One of the Co-Chairs came from a law firm that has represented both sides. And the second Co-Chair spent a few years as staff lawyer for the Saskatchewan Union of Nurses.

Seibel? I never did manage to 'dig up' his back story. I heard there was a major split with his partner, or co-worker. Who is (or was, I think he retired) a well known corporate lawyer. Seibel was, or became, a union lawyer before becoming co-chair and then chair. Angela "Zawbrosky" (can't quite remember her last name) was definitely union. The newer co-chair, I am not familiar with.

I expect Seibel will be gone, at an appropriate time. Angela seems to have bit more balance, I wouldn't be surprised if she stayed. and like I said, I'm not at all familiar with the other co-chair.

It just seemed ironic that after all these years of hearing from union sources how the SLRB is not influenced or controlled by the government, and how it is equal representation, unbiased, etc., etc., all of a sudden now the story is different.

It will be interesting to see what happens in regard to appointments, etc. I believe labour chooses their representatives, management chooses theirs, and of course, there is no-one representing the workers. I don't know how the chair and co-chairs are chosen, but they seem to come from within the ranks of the SLRB.

Speculating on who came from where, how they got there, and what their background is (and then putting it in writing and posting it on a blog) does little to reinforce your credibility.

Basing comments on rumours or using innuendo is even worse.

David thinks it's important to identify people as leftists when he's trying to discredit them but what does he have to say when when someone is identified as rightist whenever someone wants to discredit their point of view?

Hmm. It looks like these two are grasping at anything so as to avoid discussing the issues at hand.

The SLRB is a quasi-judicial body that is subject to judicial review. If they act in a biased manner they will likely have to face the Federal Court of Canada. Luckily we have a system with more than adequate balance. The problem is some sore losers want to win even when they are in the wrong. THAT is what's behind all these calls for "balance".

Larry, just look at the SLRB decisions. It lists the lawyer(s) appearing for the union and the lawyer(s) representing management. Angela Zabrowsky (sp) represented unions. I don't recall any instance where she represented management. It is neither speculation nor innuendo. I do, however, consider the decisions of the panels that she chairs to be 'balanced' and to have logical reasoning. I am not at all familiar with the other co-chair, can't even remember her name. As for Seibel, whatever happened in the law firm he worked for was before my time, and, like I said, I haven't been able to confirm any of the stories I have heard. I have read his decisions, he bends over backwards to support unions.

And no one on the SLRB is chosen from 'workers'. They are all union representatives or management reps. When a worker charges a union with a violation, there is no one on the SLRB panel from the worker's 'camp'. Again, that is fact not speculation or innuendo.

The workers are the union.

As for decisions of the LRB - it should come as no surprise that the majority of the decisions are in favour of the unions. The legislation (after all) is intended for unions (it's not intended for bosses). The role of the board is to interpret and adjudicate cases brought before the board, in accordance with the legislation they are legally required to uphold and enforce.

And my experience is that unions do not file frivolous claims at the LRB. It is an expensive proposition to file at the board, and frivolous claims would be an irresponsible expenditure of members dues.

Bosses have their own legislation, like the corporations act, etc. - in my opinion, they really have no business at the board. (It's not about them.)

By way of explanation, the legal description of the Trade Union Act is as follows:

"An Act respecting Trade Unions and the Right of Employees to organize in Trade Unions of their own choosing for the Purpose of Bargaining Collectively with their Employers."

And because it is an Act respecting Unions, it should serve unions, and by extension the workers who are the members, and who through the democratic processes enshrined in the Constitutions and Bylaws of the Unions, control those unions.

Are unions perfect institutions? No, of course not. There are, as a result, democratic ways in unions' constitutions, bylaws, and enshrined in legislation to effect change where members want change.

Most unions have some sort of internal complaint procedure and process.

And, then maybe some sort of an ombudsman or advocate to deal with individual complaints that may arise from time to time against a union - when and if those occur.

Thank you again for your comments.

I agree with your interpretation of what the LRB is. You worded it much better than I ever manage to.

The LRB is NOT neutral, it isn't supposed to be.

There is one point that I disagree with you on though. The LRB is set up for the unions, it is not set up for the workers. When a worker has a complaint against a union, they are pretty much on their own.