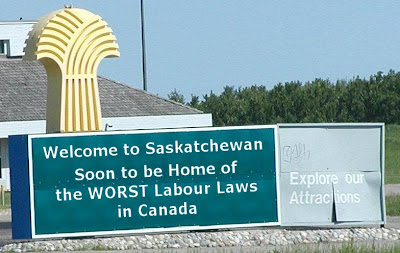 Larry, is this an actual photo? What is the story here?

Do pictures and actions like this, in this serious forum ewmpower our cause or does it make us look juvenile. How can you expect to be taken seriously when you act in no more a grown up educated fashion than our current ranks of politicians?

The current amendments proposed by the Sask. Party government will give Saskatchewan the WORST labour laws in Canada when it comes to "essential services", "union certification rights" and "employer interference". The sign is a dramatization of that fact.
__________________________________

This is mild compared to how many people feel about the government initiated attacks on the constitutional and charter rights of workers in this province.

How is it, that when we "tell it like it is" - that becomes a problem. But, the other side can engage in endless campaigns of misinformation, fear and outright lies, and that is "fair game".

Remember when the business crowd, supported by the Sask. Party opposition and a hysterical media described legislation that would actually help workers as being a "Job Killing Monster"? This is nothing - compared to that.

You need to grow up.

You need to stop taking yourself so seriously.

How about relaxing with a movie. I suggest any of the Shrek Trilogy. Or how about a few episodes of Fawlty Towers?

Me taking myself so seriously?

Have you had a good hard look in the mirror lately?

I am doing what I have been elected to do - defending the constitutional and charter rights of workers in this province.

Trolling blogs and flaming under an alias is not.

gee I hope that sign is real....it will bring a lot of new Buisness to this Province...too bad it is just a little boy's temper that got the best of him.....

Hey Larry? Hows it feel to be on the outside looking in?

Get used to it. as Sask. grows your chances of ever having any power again are getting slim...

How does this picture help your cause?

Your more serious when you do written posts about how this affects you and your organization.

Evan though I don't agree with you, I won't be rude about you say and believe.

Have a good day.

I am a part of an organization that is a member of your group....I do not disagree with the cause. I never said the tactics used by political factions were acceptable. What I did say was if we want to effect change and ascend to the next level of employee employer relations taking the "look at my little jokey childish picture approach, regardless of it's validity or if this is how people feel, is not the proper approach. What it comes down to is not letting us continue on the path of the status quo. Leave the name calling and mud slinging out of our dealings. Try to seem more educated, intelligent and classy than the other guy. And most importantly, let the people know what YOU are doing...not what the other gut is not doing.

If it is a serious issue, then act like a serious person, not someone learning to use Photoshop for the first time.

And if you don't want opposing viewpoints, ban commentors.