Sask. Party Labour Agenda has it's roots in Washington, D.C. 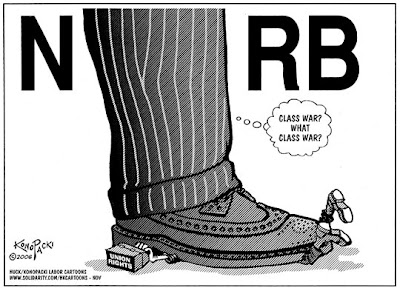 Wonder where the recent Sask. Party attack on worker rights has it's origin? Try Washington, D.C., the United States Chambers of Commerce and the George W. Bush Republicans.
You can read all about it at: ‘Card Check’ Takes a Hit - by Kim Moody.
The next thing we'll see in Saskatchewan is the new Sask. Party Government trying to justify why they need to dismantle the Saskatchewan Labour Relations Board or stack it with anti-union appointments. Even Leader-Post political columnist Murray Mandryk made that connection.
.
Make no mistake, under the Sask. Party government Saskatchewan will have the "WORST Labour Laws in Canada".
Posted by Larry Hubich at 21:12

Tell me why I should be surprised.

Of course it is, Larry. Surely you knew it had its connection to the rightwing extremist agenda.

It and TILMA and Enterprise SK all fit into the hush-hush plan for North American Union as ushered in with Mulroney's FTA, followed up with NAFTA and most recently and covertly signed, sealed and delivered in the Security and Prosperity Partnership that the Three Amigos have been working on.

Has your subscription to Canadian Dimension lapsed? ;-)

It's no surprise that Wall is behaving like George W Bush. The Sask Party is bankrolled by the same business crowd that keeps crying about how it can't ever get enough. If Bush / Cheney is owned and operated by the US Oil Cartel, the US Chamber of Commerce and others, why not the self-proclaimed pro-business Canadian politicians as well? Wall has always claimed to have the same goals as the Canadian Federation of Independent Business. He is therefore openly in cahoots with anti-union lobbyists. Ain't it nice to have an honest politician for a change? Even though some workers have ignored it and will howl when they get screwed, they can't say they weren't given fair warning.