BC residents find no interprovincial trade barriers at BC- Alberta border 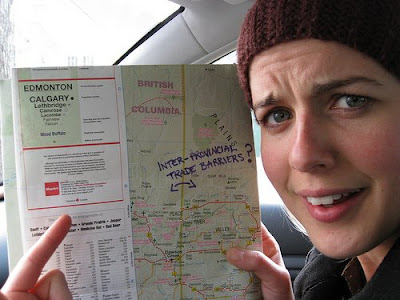 "Golden, BC - On the first anniversary of the Trade, Investment and Labour Mobility Agreement (TILMA) between BC and Alberta, a group of Golden residents traveled to the provincial border armed with a magnifying glass to challenge one of TILMA's core premises. Upon close examination of the border, they concluded that there are no significant trade barriers to justify an agreement that undermines local democracy." (Read more....)

So, how come an accredited mine engineer from Alberta cannot work in Saskatchewan until he receives Saskatchewan accreditation? Pretty much same dirt isn't it?

Simple. Negotiate a mutual recognition agreement for the occupation. Hundreds of them exist.

You don't need an intrusive, anti-democratic so-called "trade agreement" (TILMA) to accomplish that.

Even the Sask. Party acknowledged that TILMA is seriously and significantly flawed, and that they wouldn't sign it.