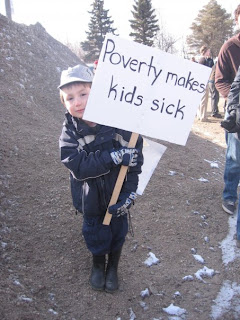 The mean-spirited Sask. Party government recently announced that they would renege on funding previously committed to the building of a communty enterprise centre (including health facilities) in Saskatoon, Sk. - "Station 20 West".
As a result, thousands of Saskatoon residents, and their supporters attended a rally on April 5, 2008 to support calls for the Sask. Party government to live up to the commitment to provide the money already set aside for the project.
Photo by Heidi Fischer
Posted by Larry Hubich at 07:57

The NDP had 16 years to eradicate poverty, and in fact it only became worse.

Is this the result of your 'worker's utopia' you wish for all? 16 years of your progress is was enough, time for something new.

Why did the NDP wait until an election campaign to do something about the crushing social programs of this area?
If indeed the programs are so desperately needed, why did the NDP refuse to do anything about it until it was politically advantageous for them to do so?
How much suffering has taken place there while the NDP waited to see how much political hay they could wring from this suffering?
Or does the NDP believe we are stupid enough to believe that the timing of this program to end suffering just happened to line up with what would be best for the NDP?
If this program was so desperately needed, it should have been done years ago, but then again the election only come every four or five years.
If Lying Lorne had decided to wait until this spring to call an election would he also have waited until spring to announce this program? Would these people have had to suffer even longer until it best suited the ndp to help them?

Hey, that's my picture. Ha ha. I googled my name and found this. Funny.

That's right Heidi. I believe I pulled this photo off of a site that was reporting on the Station 20 West demo.

I really liked the message. And, it's a very compelling visual when a child is holding a sign like that.