Government Bills are an Assault on worker rights 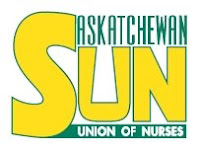 The Sask Party government's 'so-called' Labour Bills (Bill 5 and Bill 6) have absolutely nothing to do with "fairness", "balance", "public safety", or "democratic workplaces". These two anti-worker, anti-democratic pieces of legislation are an assault on worker's rights - plain and simple.

The March 18, 2008 letter to the editor from Saskatchewan Union of Nurses President, Rosalee Longmoore is another compelling example of the truth: SUN members have always ensured safe patient care.

I expect to see Rosalee's letter appearing in the daily and weekly newspapers in the very near future. The closing paragraph of the letter sets it out quite clearly:

"SUN members do not require government intervention to fulfill their professional obligation to patients and the public. Brad Wall personally acknowledged, in his January 10th letter, that SUN members have always provided the necessary care. Therefore it is clear the true intent of the proposed Bill No. 5 has nothing to do with respect to ensuring public safety, but rather is intended to strip union members of the right to strike."